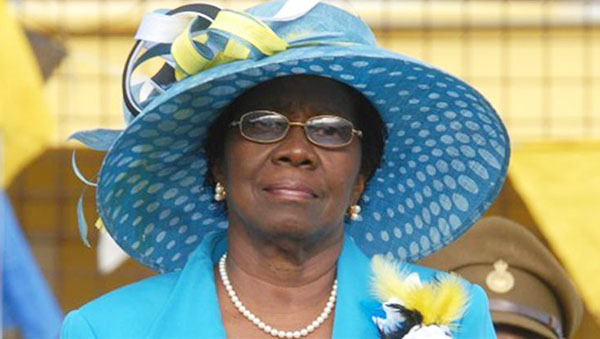 CASTRIES, St. Lucia, Apr. 26, (CMC) – A new session of the St. Lucia Parliament began here, today, with the government hinting at the possibility of a fixed date for general elections and an overhaul of the criminal justice system.

St. Lucians are due to elect a new government later this year, and both the ruling St. Lucia Labour Party (SLP) and the main opposition United Workers Party (UWP) have been staging various rallies across the island and launching candidates in preparation for the poll.

Under the present system, Prime Minister, Dr. Kenny Anthony, is the only person who could announce the date for the general election.

Governor General, Dame Pearlette Louisy, delivering the traditional Throne Speech, and outlining the government’s priorities for the coming months, said that “it cannot have gone unnoticed that with each passing electoral cycle, political campaigning to remain in office or be elected to office seems to commence far ahead of the eventual dissolution of Parliament.

“The uncertainty over election dates does not fully explain this phenomenon but it can also encourage it. Some have argued that the system is manifestly unfair as the incumbent party has the advantage of surprise. These days, that argument can hardly stand scrutiny as electoral preparations have become rather public,” she told legislators.

Dame Pearlette said that there can be no doubt that impending elections can add to uncertainty and indecision by investors, domestic or foreign. Investors often prefer to wait on the outcome of general elections to make investment decisions.

“Of course, it does not follow that if fixed election dates are introduced the tendency to early campaigning for general elections will cease. But the argument about “fairness” cannot be totally dismissed,” she said.

She told legislators that it was once thought that fixed election dates were inconsistent with the parliamentary system of governance that was inherited from Westminster.

“This view has now been discarded, by none other than the United Kingdom Parliament; the cradle of Westminster conventions and practices. That country’s parliament has now enacted what it has described as a “Fixed-term Parliaments Act.”

“My government has noted this development with considerable interest and will also consider the enactment of legislation to introduce fixed election dates,” she said.

In her address, Dame Pearlette said that political representation is a major preoccupation this year and it is likely that this would be the last session of the Parliament prior to the next general elections.

“Our country will, in time, proceed to the polls to allow for the expression of the democratic will of the people to select their political representatives,” she said, noting that the election would represent “our tenth such event since attaining independence in 1979 and our 17th since attaining adult suffrage in 1951”.

“Further to this, the peaceful transfer of the reins of power from one party to another has occurred five times since independence and six times since adult suffrage. We have therefore, if only by virtue of this metric, achieved a mature and stable democracy. The electorate therefore expects behaviour that reflects our maturity as a nation and as a people.”

But she said that democracy traverses deeper than institutions such as Parliament and that it goes beyond political leadership, or the commonly coined “card-carrying” party membership.

“Each citizen must be responsible in its actions towards the other. Democracy also requires expression of views that does not cause unfair injury to the other. And so, the way we speak on talk shows, what we write on blogs and other social media threads all impact the richness, diversity and quality of our democracy.”

Dame Pearlette said that when the election date arrives there will be people casting ballots for the first time while others would be done so “for the 17th time.

“Whatever the case may be, this process represents a fundamental pillar of our democracy and the responsibility of the ballot should never be taken lightly no matter if it is new or habitual.

“The ballot still remains the fundamental, expression of each citizen’s political will. As such, I urge all eligible voters to exercise their franchise not only in the interest of some perceived personal gain, but in the interest of our collective and common dominion.”

The Head of State also noted that there is a need for the overhaul of the criminal justice system and that the government has heard the widespread concerns over the number of remand prisoners at the Bordelais Correctional Facility.

“Over the past few weeks, the Judiciary has made a determined effort to reduce the number of remand prisoners,” noting that at the end of 2015, there had been a nine per cent decrease in the number of individuals on remand as against 2014.

She said while there had been measures to reduce the remand population the government believes that the Criminal Justice System requires an overhaul.

“If the system is broken, we must fix it. It is clear that despite the monumental efforts of the judiciary and the state, the expected benefits of the reforms of the past few years have not always yielded the benefits championed for those reforms,” she said.

“My government believes that the time has come to review the structure and operations of our criminal justice system and to that end it will work with the judiciary to appoint a team of experts to conduct a comprehensive review of the system in all its facets.”

She said the team will focus on our laws, both substantive and procedural on the structure and the staffing of the system.

“We must ensure that our citizens are satisfied that they have a system that is fair, just and efficient,” Dame Pearlette added.