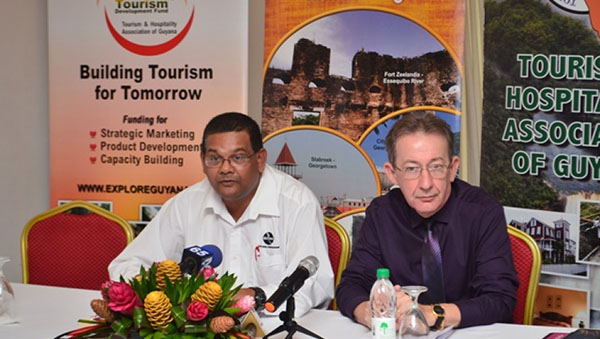 Director of the Guyana Tourism Authority (GTA) Indranauth Haralsingh and President of the Tourism and Hospitality Association of Guyana (THAG), Shaun McGrath at the launch of restaurant week. Photo credit: GINA.

GEORGETOWN, Guyana, April 27 (GINA) — Restaurant Week was launched, today, under the theme “Explore, eat and repeat”, to facilitate the high influx of overseas visitors expected in the country for the 50th Independence anniversary celebrations.

The event, which will be hosted by the Tourism and Hospitality Association of Guyana (THAG), in collaboration with the Guyana Tourism Authority (GTA) and the Ministry of Public Telecommunications, will be staged from April 29 to May 8.

This activity would be beneficial for the long-term development of the tourism industry and the restaurant sector in Guyana, THAG’s President, Shaun McGrath said at the launch at the Herdmanston Lodge.

The participating restaurants “are improving their standards (to better) last year’s and will offer you the best menu at the best value,” McGrath stated.

Therefore, this year’s event will see lots of creativity, including local products, as well as a 30% discount value, he said.

A VAT inclusive two-course lunch will cost $2000, the same as what obtained during last year’s event. A three-course dinner can be had for either $4000 or $5000, depending on the restaurant.

Director of GTA, Indranauth Haralsingh  said arrivals are up about 7.5% (January to March) and are expected to increase as time progresses. As a result, Restaurant Week will benefit the overseas visitors, as well as give persons interested in treating their mothers this Mother’s Day and the other holidays, an opportunity to do so.

In addition, there will also be a competition where participants can photograph their food and restaurant, post it to their Facebook or Twitter page and hash tag as #officialgow for the daily challenge.  The winner for best photograph of the day will win a lunch or dinner at participating restaurants and the overall winner, a trip with Fly Jamaica Airlines to any Fly Jamaica destination.

The event will be advertised on television, radio and newspaper, as well as Facebook and Twitter to keep individuals informed and updated.