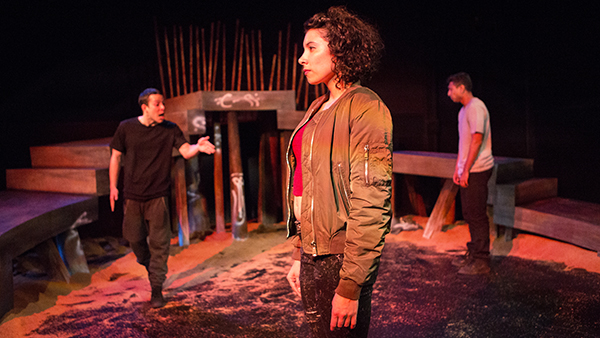 The world premiere of “Scarberia,” a riveting mystery commissioned by Young People’s Theatre (YPT) and workshopped at the Banff Centre Playwrights Colony, is now on at the theatre in Toronto.

Written by award-winning Canadian expatriot, Evan Placey, the play officially opened on April 21 and runs until May 1.

In the playwright’s message, Placey says: “Scarberia takes its title from the nickname given to the Toronto municipality in the 60’s because of its seeming distance to downtown – and like its other nicknames – Scarlem, Scartown – remains contentious.

At the heart of the play are questions about how much young people are shaped (or not) in the image of where they grow up. The characters have conflicting relationships to their spaces – pride, ambivalence, indifference. How much are our futures shaped for us by the environment in which we grow up or how much do we lay our own path?” 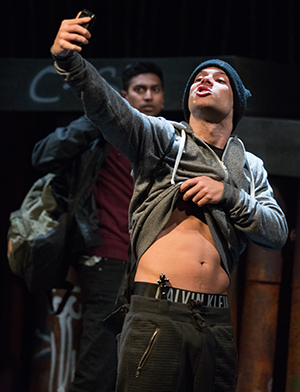 (L-R):Shelly Antony and Mishka Thébaud in a scene from Scarberia at Young People’s theatre. Photo by Cylla von Tiedemann.

It’s considered “a sort of modern day “Romeo and Juliet” or has been called “a sci-fi CSI,” notes MyGayToronto.com.
What one sees on stage is the strong characterization of two young men (Shelly Antony and Mishka Thébaud) playing double roles who transform themselves and their accents – Canadian and British — to depict this story that unfolds in two countries.

The fate of two sets of boys — one in Scarborough, Ontario and one in carborough, England — are linked by one body found washed up on a beach.

“Scarberia” follows the stories of these four boys: one pair knows the drowned girl and must manage the fallout of her disappearance; the other pair searches for the cause of death of a stranger.

As each teen tries to navigate out of his increasingly troubled situation, he finds his city and its poor reputation refuses to release its grip on his future prospects.

Each must make a decision to change his world or be imprisoned by it.

“If a best friend is the kind you believe you’ll have for life and for whom you’d do anything, is there anything you wouldn’t do?” asks YPT artistic director, Allen MacInnis. “Scarberia is a tense and provocative examination of the price of friendship and the limits of loyalty.”

In an InsideToronto.com story about the play, Placey said he had “this idea around quantum physics and mechanics and the idea of leaping in multiple dimensions and parallel dimensions. Could I play with the two different Scarboroughs being versions of each other in some way?”

MacInnis said he included the play in YPT’s 50th Anniversary Season because “it’s a great, high-stakes mystery for teens.”

It is a play for ages 14 and up and there is an advisory for strong language and mature content. 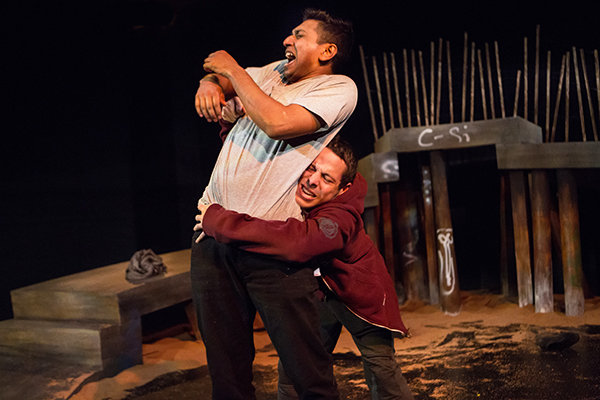 (L-R):Shelly Antony and Mishka Thébaud in a scene from Scarberia at Young People’s theatre. Photo by Cylla von Tiedemann.

The drowned girl is played by Alejandra Simmons (Marisha), who is also the narrator at key points, providing a context for what happened in both Scarboroughs and prefacing the action to follow.

The energetic pace of the action, the frenetic, provocative and probing dialogue of the two main characters and the loyal friendship are appealing to a youthful audience.

Placey notes that: “Despite the prominence of location, it’s important to state that these characters by no means represent a wider picture of all of their peers in either Scarborough, or even a small percentage of them. Like the young people on both sides of the Atlantic who helped bring this play to fruition, they are individuals. They are Scarborians. But they don’t embody all of Scarborough. As ever, this is a work of fiction.”

“It’s a play about friendship, about loyalty, about love, and the difficult, dangerous, complex decisions we often have to make in the name of them,” he says in the playwright’s message.

The plays runs until May 1 at Young People’s Theatre in Toronto.