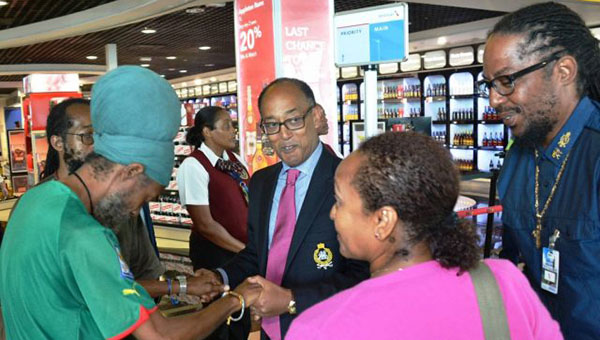 MONTEGO BAY, Jamaica May 2, (JIS) — His Imperial Highness, Prince Ermias Sahle-Selassie and his wife, Princess Saba Kebede, departed the island on April 30, following their nine-day visit to commemorate the 50th anniversary of the State visit of his grandfather, the late Emperor of Ethiopia, His Imperial Majesty, Haile Selassie.

The Prince, who spoke with JIS News before leaving the Sangster International Airport, in Montego Bay, expressed appreciation to the government and people of Jamaica, particularly the Rastafarian community, for making his visit memorable. He said he hopes to return to Jamaica soon.

Prince Sahle-Selassie said he cherished the fond memories of his visit and “it was very good to see that the legacy of His Majesty is still alive in Jamaica today.”

Among his most memorable stops during his cross-island tour was his visit to the Maroons of Accompong, St. Elizabeth, he said.

“That was a great experience, also the visits to the different mansions of Rastafari: Bobo-shanti Hill, Nyah Binghi and the 12 tribes,” he said, adding that visiting the high school named in honour of his grandfather, in Kingston, was also of great significance.

The Prince’s visit involved a number of activities, including a floral tribute to National Hero, Marcus Mosiah Garvey, at National Heroes Park; courtesy calls on Prime Minister, the Andrew Holness; and Leader of the Opposition, Portia Simpson Miller, as well as tours of the historic exhibition,‘Rastafari: Unconquerable!’, at the National Museum of Jamaica in Kingston and Montego Bay.