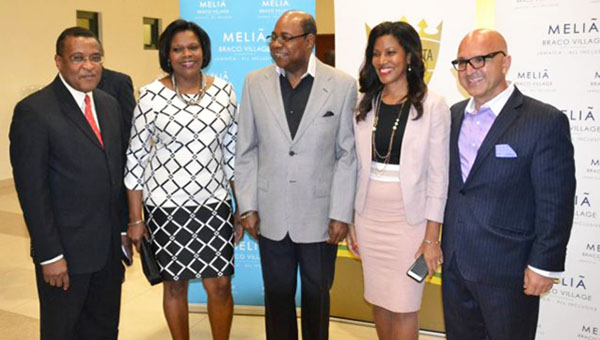 Jamaica Tourism Minister To Sign Agreement With Cuba May 6

ST. JAMES, Jamaica May 2 (JIS) — Tourism Minister, Edmund Bartlett, says he will be signing an agreement with his tourism counterpart in Cuba, which will facilitate multi-destination marketing between the countries.

Addressing the official opening of the Jamaica Product Exchange (JAPEX) Trade Show, at the Montego Bay Convention Centre, in St. James, on April 29, Bartlett also said that another agreement is to be signed soon, between Jamaica and a number of Caribbean countries, for a similar multi-destination marketing program to commence.

“On Friday of next week (May 6), Minister (Manuel Cruz) Marrero (Minister of Tourism in Cuba) and myself will sign an agreement for multi-destination tourism between Cuba and Jamaica and somewhere in the middle of June, a similar signing will take place between the Dominican Republic and Jamaica,” he noted.

The Minister said the push for multi-destination marketing for Jamaica and its Caribbean counterparts is necessary, because it has been discovered that the way forward for the growth of tourism in the region is based on island convergences and not island competitiveness.

“The way forward for the growth of tourism in the Caribbean is about collaboration and the sharing of resources and the rationalization of our space and the harmonization of our policies,” Bartlett argued.

Meanwhile, the Minister praised the resilience of the tourism industry, pointing out that it remains the only industry in Jamaica which has grown every year over the last 30 years.

“We have grown between one and a half and two and a half per cent over the period,” he noted, adding that his plans for the industry include programs which will push marketing and result in significant growth through partnership with the stakeholders.

He said the government will be pushing growth and prosperity, with tourism being one of the main vehicles involved.

“One of our main goals is to ensure the sustainable development of our nation and an improved standard of living for every Jamaican. The Ministry of Tourism will be instrumental in achieving the targets. It is a sector that has the potential to stimulate wide- scale economic activities, drive new growth in our communities, generate the jobs that we need so badly, and earn billions of dollars in foreign exchange,” the Minister said.

Also speaking at the tourism trade show, President of the Jamaica Hotel and Tourist Association (JHTA), Nicola Madden Greig, said Jamaica continues to perform well in terms of attracting visitors to the island, with just over 2 million arrivals recorded in 2015.

Madden Greig said the arrivals also resulted in a significant increase in earnings for the industry, adding that despite the achievements, stakeholders in the industry cannot afford to cut back on their efforts to ensure that Jamaica remains ahead of the competition.

She pointed out that efforts are also needed to re-energize the Canadian market, which has suffered a fall off in business.

“As we look at our achievements, we remain cognizant that with an uncertain global environment and intensifying regional competition, challenges will persist in the near and medium term. This winter was particularly challenging for our Canadian partners and together we will have to work to ensure that this market rebounds,” she added.

Mrs. Madden Greig noted that the sector has grown slightly so far this year, when compared to the similar period of last year.

“The JHTA, in collaboration with the Jamaica Tourist Board and you our partners, would like to deepen the conversation on how we can move Jamaica to double digit growth. This effort will require that we all think outside of the box, stretch our imagination and re-double our efforts with razor thin focus,” she told the gathering.