New in Pride
Home / International News / Could The UN Be Doing More To Protect Journalists? 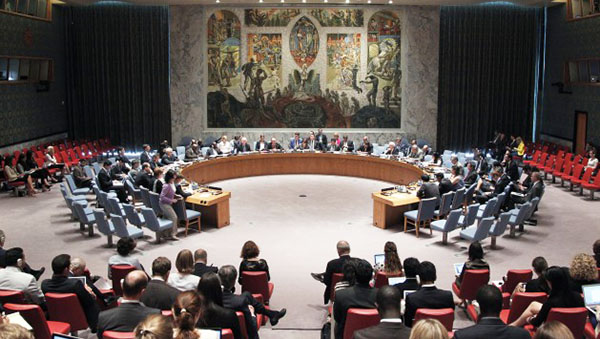 A UN Security Council Debate on Protection of Journalists in Armed Conflict in 2013. UN Photo/JC McIlwaine.

Could The UN Be Doing More To Protect Journalists?

UNITED NATIONS, New York May 3 (IPS) — As the world commemorates World Press Freedom Day, today, a coalition of some 35 press freedom groups is calling on the 193-member General Assembly to appoint a Special Representative of the Secretary General to monitor and oversee the safety of journalists worldwide.

Asked about the proposal, UN Spokesperson, Stephane Dujarric, told reporters: “Obviously (this is) something we are aware of.”

“But we will see where the discussions go in the General Assembly,” he added.

Speaking on condition of anonymity, an Asian diplomat told IPS he will be “pleasantly surprised” if the proposal is approved by the General Assembly.

He pointed out that even the appointment of Special Rapporteurs by the Geneva-based Human Rights Council is considered “politically intrusive” by some member states that refuse formal visits by these envoys to probe human rights violations.

The Special Rapporteur on Iran has not been given permission to visit the country since the post was created five years ago.

Since 2012, the United Nations has adopted several resolutions condemning the killing and imprisonment of journalists. But concrete actions have been lagging far behind public pronouncements.

A Special Representative, if approved by the General Assembly, “would bring added attention to the risks faced by journalists and, by working closely with the secretary-general, would have the political weight and legitimacy to take concrete action to protect journalists and to hold U.N. agencies accountable for integrating the action plan into their work,” says the coalition in a letter to Secretary-General, Ban Ki-moon, and to member states.

Still, says CPJ, the killers of journalists go free nine times out of 10 – “a statistic that has scarcely budged since 2012.”

The killings have been attributed not only to rebel forces and terrorist groups but also to governments in power.

The irony of it is that killings continue to take place in countries that are parties to some of the resolutions adopted at the United Nations.

The resolution, on the protection of journalists, was first adopted in November 2013 and reaffirmed last year, for the third consecutive year.

Bob Dietz, CPJ’s Asia program coordinator, told IPS the UN has made many of the right statements about protecting journalists, but there has been little overt action.

“We’ve seen little motion after the introduction of the U.N. Plan of Action for the Safety of Journalists and the Issue of Impunity within the U.N. or in its member states,” he said.

The Paris-based UN Educational, Scientific and Cultural Organisation (UNESCO) was identified as the agency within the UN to promote freedom of expression and of the press, but there have been few results of its attempts to address the problem.

“And the motion the plan generated didn’t really seem to grab the attention of a wider range of U.N. agencies,” he added.

While there has been some movement within some countries to try to address the problem of the killings and attacks on the media, and the impunity with which those attacks take place, it is hard to see sustained international movement toward addressing the problem, he declared.

Dujarric told reporters the Secretary‑General’s position on press freedom is clear, and those who harass, kill and torture journalists need to face justice.

Dujarric said there are already a number of mechanisms in place in different parts of the system, whether it’s the human rights mechanisms or UNESCO that are there to help protect journalists.

Ian Williams, UN correspondent for Tribune and author of “Untold: a fUN guide to the UN”, told IPS that the UN’s position on press freedom can seem contradictory.

So while UNESCO has given its 2016 Press Freedom Award to Khadija Ismayilova, an Azerbaijani journalist who was detained in September 2015, and sentenced to seven and a half years’ imprisonment on spurious charges, UNESCO has not rescinded, and indeed actively celebrates, its UNESCO Goodwill ambassadorship to Mehriban Aliyeva, the wife of Azeri President Ilam Aliyev, even though it awarded its prize to yet another persecuted Azeri journalist, Eynulla Fatullayev, in 2012.

On a more general level, it is probably true, that where the media are persecuted, so are the people.

“It should remind journalists who stay silent over breaches of other people’s rights that they are putting themselves in the frame”.

In particular, nine years after Wikileaks released the 2007 video footage of a US helicopter gunship team shooting down a Reuters crew and then the civilians who tried to succour them, the silence of Western media over the event is deafening, with complete impunity for the perpetrators and their commanders, said Williams.

“Journalists are not criminals. But they are often mistreated or even killed because they have the courage to expose criminal acts,” he said.

Last year alone, 105 journalists lost their lives. The murders of Western journalists by Da’esh and other violent extremists claimed global attention. But 95 per cent of the journalists killed in armed conflict are locally based, said Ki-moon.

Last month, Mexican journalist, Moisés Dagdug Lutzow, was killed in his home in the city of Villahermosa. Elvis Ordaniza, a crime reporter in the Philippines, was shot. So was Karun Misra, a district bureau chief at the Jan Sandesh Times in India.

“Each time a journalist is killed, each time the press is silenced, the rule of law and democracy get weaker,” he said, appealing to member states “to participate in the United Nations Plan of Action on the Safety of Journalists.”

“During the past nine years as Secretary-General, I have been working hard to defend the press, both publicly and behind the scenes, through discreet diplomatic efforts to free journalists who have been unjustly detained.”

“We must all do our part to preserve the freedom of the press, civil society and human rights defenders to do their work,” the secretary-general declared.