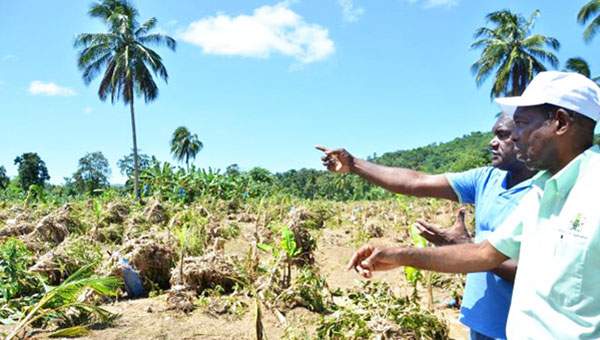 Minister without Portfolio in the Ministry of Industry, Commerce, Agriculture and Fisheries, J.C. Hutchinson (right), looks on as Portland farmer, Glenton Cole, points out the extent of damage to his farm, following recent flood rains. The Minister was on a tour of severely affected farming communities in the parish on Tuesday (May 3). Photo credit: Yhomo Hutchinson/JIS.

PORTLAND, Jamaica May 4 (JIS) — Starting next week, the government will roll out a program of assistance for farmers in Portland and St. Thomas, who lost crops and livestock during the recent flood rains.

This was announced by Minister without Portfolio in the Ministry of Industry, Commerce, Agriculture and Fisheries, J.C. Hutchinson, who met with farmers in Portland, following a tour of the worst affected areas of the parish on May 3.

He said the program, to be managed by the Rural Agricultural Development Authority (RADA), will include the provision of fertiliser, seeds, livestock and feed.

Minister Hutchinson explained that a goat-revolving program will be implemented, where farmers will be given ewes, which they will breed and then pass on the first females to other farmers.

He said the aim is to resuscitate livestock and upgrade the quality of ruminants in the country.

“This is going to be a project…it is not one where we are just going to be having it remain with you who have lost, but we are going to be expanding it to other persons who want to go into goat rearing,” the Minister said.

In the meantime, Minister Hutchinson said it was “heart-rending” to see first-hand, the devastation to crops and livestock.

He noted that as a farmer himself, he empathised with all those impacted, and reiterated the government’s commitment to do all it can to “help them get back on their feet.”

Meanwhile, Glenton Cole, who lost eight acres of coffee and 11 acres of banana, said he was pleased with the immediacy of the intervention from the government, noting that this is critical in getting production restarted in the shortest possible time.

Banana and plantain farmer, Hervel Thomas, expressed appreciation, noting that the aid “will go a far way to put me back on track.”

Germaine Martin, who told JIS News that he lost 95 per cent of his six acres of banana and coffee, expressed gratitude for the help.

The overall damage to crops and livestock is estimated at over $100 million and affected a total of 516 farmers – 251 in Portland and 265 in St. Thomas.