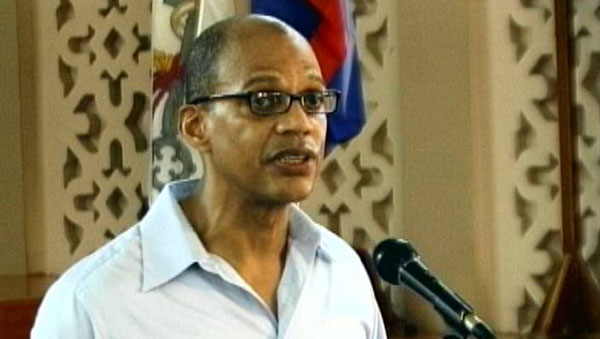 Belize's ambassador to the European Union, Dr. Dylan Vernon, recently took the opportunity to visit the island of Gorée, a transhipment point for African slaves for almost four centuries.

DAKAR, Senegal, May 5, (CMC) — Belize’s ambassador to the European Union, Dr. Dylan Vernon, was excited about coming to West Africa for the first time, even though it was not just about his diplomatic mission.

He had come to Senegal to attend the 103rd meeting of the African, Caribbean and Pacific (ACP) Council of Ministers and also to participate in the joint ACP-European Union meeting.

But, the diplomat, like other delegates and journalists, mainly from the Caribbean, took the opportunity to visit the island of Gorée, a transhipment point for African slaves for almost four centuries.

“Coming here brings back a lot of my feelings about the fact that my country is one of those that was built on the slave trade,” Vernon told the Caribbean Media Corporation (CMC) during his tour of the 28-hectare island, which the United Nations Educational, Scientific and Cultural Organization (UNESCO) says was the largest slave-trading centre on the African coast from the 15th to the 19th century.

“Belize, as the rest of the Caribbean and parts of the Americas, was a place where slaves were taken and I myself, have ancestors who were slaves. And to come to a place like this that could be where some of my ancestors came from, brings some emotions,” Vernon said, visiting also the only surviving slave house on the island, located 3.5 kilometres from Dakar.

During the visit, Vernon said he experienced “mixed emotions, both of interest in historical facts and a great personal sense of the feeling where my ancestors could have come from and what sort of destruction of families happened to make the journey across the Atlantic”.

Although UNESCO declared Gorée a World Heritage Site in September 1978, historians are still to acknowledge the role it played in the slave trade.

But one undisputed historical fact is that many Africans were ripped from their homes across West Africa and shipped from Gorée to the Americas. Some estimates say that 20 million Africans passed through the Island between the mid-1500s and the mid-1800s.

“Because Gorée is an island, the slaves couldn’t escape from here,” a guide tells the visiting delegation, which included descendants of slave and slave masters.

“But half of the slaves died because … it took them 10 to 12 weeks to get to their destinations – Brazil, Haiti, Cuba and the rest of the West Indies,” the guide quickly adds.

Gorée is a World Heritage Site and as a result, construction of new buildings to replace the existing structures is prohibited.

Among the buildings is the Slave House, which offers visitors an insight into the conditions in which Africans were kept before they were transhipped to the Americas, mainly to Cuba, Haiti and Brazil, before further “distribution”.

There were initially 20 slave houses on the island, the first of which was built by the Portuguese in 1536.

The only remaining slave house was built by the Dutch in 1776. 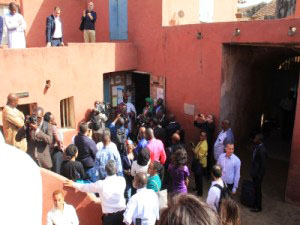 Visitors to Senegal stand inside the courtyard of the only remaining slave house on Gorée island. (CMC photo).

Before the World Heritage Site declaration, the other slave houses had been remodelled and converted to private homes for the island’s inhabitants, 1,200 of whom live there today.

“But, inside, they put 15-29 persons,” explains M. Eloi Coly, chief curator of Gorée, adding “they sat with their backs against the wall, shackled around the neck and the arms”.

The slaves were freed once a day.

“It was just to permit them to go outside to relieve themselves,” Coly says, pointing to a small sink directly in front of the slave house.

“Children normally laid down on the floor like fishes in sardine boxes, which contributed to high death rate,” Cory said, noting the role the slave houses played in not just curtailing the physical liberty of the slaves.

“Importantly, in the slave houses began the destruction of the family structure, because the destination of the slaves depended on the buyer. That is why father could be sent to Louisiana, mother to Brazil, children to Haiti or the West Indies. So, the separation was total,” Coly said.

He said that “rebellious slaves” were placed in the “cellule de recalcitrants” — a narrow space under the stairs from the ground to upper floor.

“They used it as a punishment of slaves. But the problem for the guards was not to know how many slaves it was possible to put inside at the same time. It was just how to shut the door after forcing in the captives, because they considered the captives not as human beings, but as merchandise,” Coly recounts of the space reserved for “recalcitrant” slaves.

When it was time to ship the slaves to the Americas, they left the slave houses and Gorée through what is now known as “The Door of No Return”, catching their final glimpses of their homeland.

“After the slaves stepped out of the door, it was bye-bye Africa,” the curator said, adding that they were loaded into canoes and taken to the slave ships anchored further out at sea.

St. Vincent and the Grenadines Deputy Prime Minister, Sir Louis Straker, who was among the dignitaries on the tour, also shared his reflections after standing in “The Door of No Return”.

“This is the door. Goodbye to the home that our forefathers lived in happiness, lived in freedom. From here, they become slaves on to different parts of the world — families separated and they become totally alienated from their homeland. Thank God I am back to bring back the spirit, and I hear their cries,” said the senior politician, who is also Minister of Foreign Affairs and Foreign Trade.

Today, Gorée is home to an estimated 1,200 Senegalese people, mainly French, the last colonisers of the island having left when Senegal gained independence in 1960.

The main activity on the island is tourism, followed by fishing.

Most people on the island are guides, vendors and restaurateurs and 50 per cent of the island’s visitors come from France, with the remainder originating from Africa and the Americas.

Prominent visitors to the island have included the late president of South Africa and anti-apartheid fighter, Nelson Mandela, and the United States President Barack Obama.

Among the monuments on the island is a palm tree planted December 5, 2014, marking the first anniversary of Mandela’s death.

In 2002, Guadeloupe donated to Gorée “La Statue de la Libération de L’esclavage”, a monument from the French Department in commemoration of the slave trade.

But Gorée itself is a memorial to the Black Diaspora.

Vernon said that the island brings back “some feeling of anger towards those who did it (enslaved Africans) — the Europeans of various nationalities and it brings back also memories of my own history of Belize, where slaves were used to build the economy.”

He said that while it might not be possible to establish the ties directly, history shows that some of the slaves that went to Belize came from West Africa.

“Exactly which parts and how, that story still has to be written, to some extent, but the fact is that Belize is one of the places where slaves were taken — by the British in this case, and they could have indeed come from West Africa,” he told CMC.