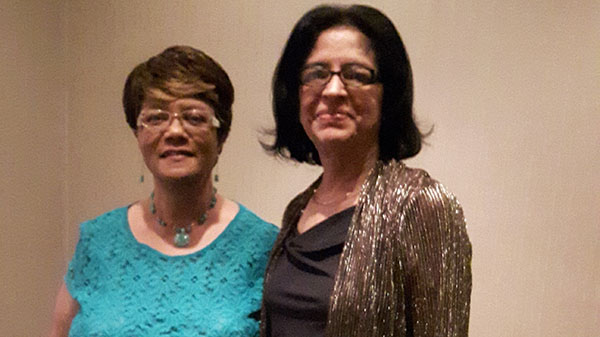 “Come back and help us build Guyana” was the message from Riehl to the Guyanese-Canadian community, adding, that her job in Canada is two-fold: to facilitate better trade relations with Canada; and to encourage Guyanese, of all skill sets, to return to Guyana and assist in nation building.

“Guyana needs all your skills”, she said.

Guyana Consul General, Sattie Sawh, who welcomed and introduced the High Commissioner, encouraged her to visit Toronto regularly, explaining that the city is the place where the action is, and where the majority of Guyanese-Canadians reside and work, extremely hard, to support Guyana.

Riehl, an Attorney-at-Law, obtained her post-secondary education at the Universities of Guyana and The West Indies, as well as the Hugh Wooding Law School in Trinidad and Tobago.

Her career experience includes: 12 years of military service as the Second Lieutenant in The Women’s Army Corps of The Guyana Defence Force (GDF); practising as an Attorney-at-Law; a political career as an elected member and Deputy Speaker of Guyana’s National Assembly; and the first Chairperson of The Parliamentary Sectoral Committee on Foreign Relations.

In her address, she noted that while she was growing up, Guyana’s population was 735,000 and today it is still 735,000, attesting to the fact that Guyanese are leaving their homeland, but not returning to contribute to her building and progress.

She praised Guyanese for their numerous past and current contributions to help Guyanese at home, but extended an invitation for them to participate more vigorously in the future. She informed her audience that there is a lack of Guyanese professionals in the country, especially in the medical field, where there is only one psychiatrist and one pathologist servicing the entire country.

She said that as she attended previous functions, she noticed that Guyanese sang the Canadian National Anthem very lustily, but this is not so when they sing the Guyana National Anthem, as it seems that they have lost the words of the country’s Anthem.

She added that she would like to see some improvement in this area.

Welcoming comments were also proffered by Haynesley Benn, Consular General of Barbados, and Frank Fernandes, Patron for the Alliance of Guyanese Organizations in Canada.

The vote of thanks was given by Michelle Butters, Consul of the Guyana Consulate General.

Clyde Gulliver performed commendably as Master of Ceremonies for the evening, recognizing the members of the Caribbean Consular Corps, as well as interjecting a few segments of humour, which were thoroughly enjoyed.

He also invited and encouraged guests to attend the Flag Raising Ceremony, which will be held at The Toronto City Hall at 11:00 am on Thursday, May 26, in recognition of Guyana’s 50th Anniversary of Independence.