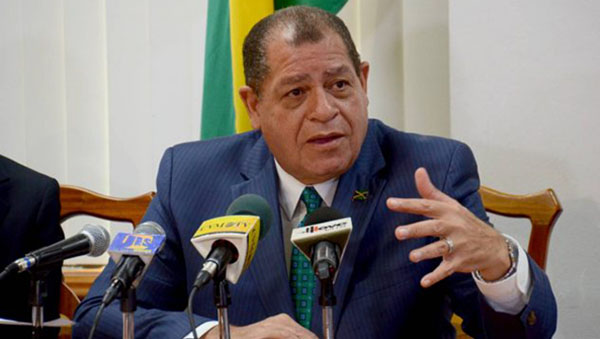 KINGSTON, Jamaica May 13, (JIS) — Minister of Finance and the Public Service, Audley Shaw, says Jamaica must move with urgency to develop a medical marijuana industry.

He pointed out that exploiting the benefits of marijuana is “not about smoking a spliff” or “walking around with two ounces of the weed.”

“This is about building an industry of value-added products,” the Minister emphasised.

Shaw was opening the 2016/17 Budget Debate in the House on May 12. His presentation was made under the theme: ‘Partnership for Economic Growth’.

Citing other countries that have benefited from using the plant, the Minister contended that Jamaica is uniquely positioned to play a leading role in the medical marijuana industry which can create wealth for the country.

He noted that in the United States alone, the legal marijuana market is predicted to rise from US$6.7 billion this year to US$21.8 billion by 2020, pointing out as well, that Canada has built a major industry which may become fully legalised next year.

Shaw said developing a medical marijuana industry for the country will involve pursuing research at the universities to create medicines, which can help people dealing with major illnesses, such as diabetes, epilepsy and others.

“One simple breakthrough in any of these areas will contribute billions of dollars to our economy. This is about turning wasted land into growing hemp products which contain no psychoactive properties and can be used for food, textiles, building materials and many others,” he said.

The Finance Minister explained that the aim is to build an industry in Jamaica where value-added products will be processed and manufactured locally.

“This is about an opportunity for small farmers, who will now earn from land which is sitting idle. This is about our tourism industry where Jamaica will be positioned as the medical tourism capital, bringing health and wellness to the world,” he said.

In the meantime, Minister Shaw cited the pioneering role of Jamaican scientists in the development of Canasol for glaucoma and Asthmasol for asthma.

Speaking, on another Budget aspect, at a post-budget media briefing at the Ministry’s offices at National Heroes Circle in Kingston, on Friday, May 13, Shaw, said the new $1.5 million income tax threshold is expected to have a positive effect on all hardworking Jamaicans.

He stated that well over 250,000 taxpayers, including self-employed persons, will benefit from the new personal income tax threshold, which is being implemented over two years.

“$26.6 billion are being put back into the hands of people and everybody is, ultimately, going to benefit…even those who don’t directly get money by way of a payback because they are below the threshold,” he stated, in reference to the 592,000 persons earning below $1 million.

Meanwhile, Minister Shaw said the new revenue measures also announced, will not have a significant impact on inflation.

He said the technocrats in the Ministry have advised that the effect on inflation will be negligible at about 0.2 per cent.

“These taxes are not… (like the General Consumption Tax) that affect purchases of basic foods,” the Minister explained.

The revenue measures, aimed at raising $13.6 billion include: an increase in the Special Consumption Tax (SCT) on petrol by $7 per litre; increase in the SCT on cigarettes to $14 per stick; an increase in departure tax from US$20 to US$35; introduction of SCT for Liquefied Natural Gas (LNG); and a revision of the heavy fuel oil regime.

“This tax does not apply to the Jamaica Public Service; it is only related to fuel for (motor vehicles) only,” he assured.