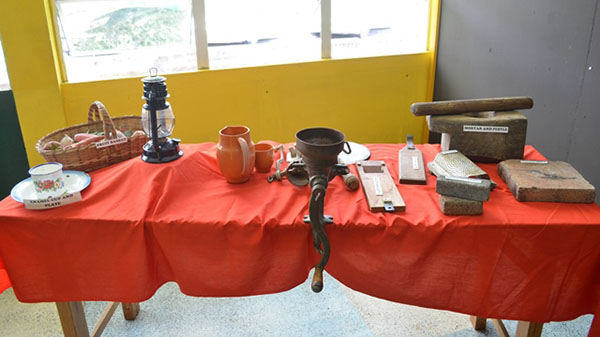 Some of the cooking utensils that were used to prepare dishes in the olden days. Photo credit: GINA.

GEORGETOWN, Guyana, May 18 (GINA) — The Guyana National Museum, the Museum of African Heritage and the Walter Roth Museum, have brought together relics, objects, artifacts and articles, for a one-month exhibition in recognition and celebration of Guyanese culture and identity.

The exhibition takes a look-back at the creative and innovative aspects of Guyanese culture and tradition. It began today at the Guyana National Museum, and titled, “Celebrating Our Rich Legacy, Guyanese Culture and Identity, A Look Back at the Good Ol’ Days”, in commemoration of International Museum Day.

Administrator of the Guyana National Museum, Tamika Boatswain, speaking with the media today, explained that the exhibition examines “how life used to be long ago.” 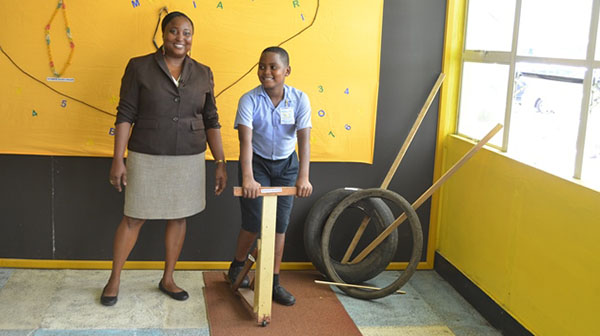 Administrator of the Guyana National Museum, Tamika Boatswain, shares in a child’s enjoyment of a wooden scooter. Photo credit: GINA.

She said the collections pay attention, particularly, to “how resourceful and industrious Guyanese used to be in using natural resources to improve their lives.”

The collection includes handmade arts and crafts, such as buck bead chains, a patchwork quilt, a grass skirt, and calabash and coconut crafts. There is also a section that examines childhood games. 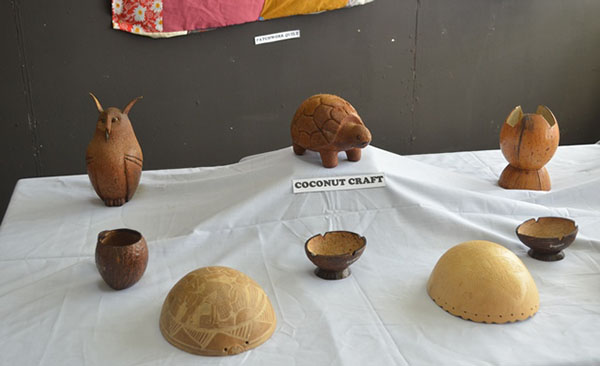 Some of the handmade coconut craft on display. Photo credit: GINA.

“We recognised that long ago, children were more resourceful and we are paying tribute to that resourceful ingenuity, creativity, “Boatswain explained.

The exhibition also captured and reflected on the folklore myths and legends that are an integral part of Guyanese culture, the architectural heritage and the food culture, particularly the cooking techniques employed to prepared those dishes. 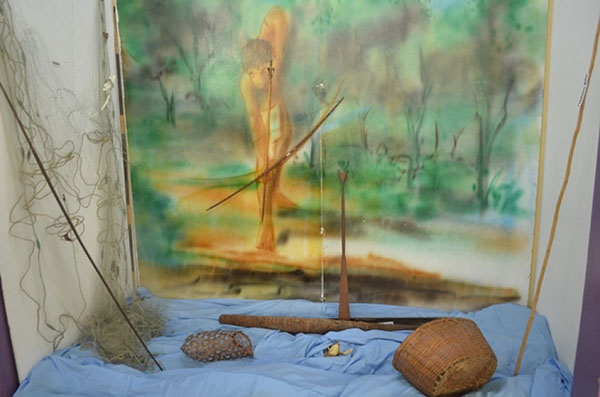 On display is a galvanised oven that Guyanese back then, used to cook over the coal pot. There is also a cast iron pot, a goblet and a ‘cow mouth’ which is part of the “logie” structure and in it a mud fire side. There is also a component of the exhibition that pays tribute to fishing as a pastime.

The tribute to the architecture and architectural skills pays homage to such creativity and innovation as the Demerara shutters and the Widows Walk.

International Museum Day is a worldwide annual celebration supported by the International Council of Museum (ICOM) in recognition of the roles and responsibilities of Museums.

ICOMS’s theme for 2016 is “Museums and Cultural Landscapes.”

The exhibition at the Guyana National Museum will run until June 18, as part of Guyana’s 50th Independence Anniversary celebrations.