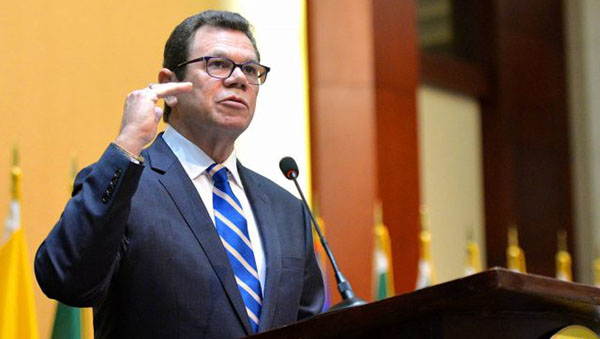 But he added in order to make this vision a reality, regional countries would need to create the necessary foundations by adapting an appropriate suite of macro-economic and business-friendly reforms, as well as closer alignment of the education system to the needs of the productive sector.

In addition, Smith said there will be need for climate-proofing, critical social and economic infrastructure against natural hazards, as well as diversifying local economies by developing new sectors such as renewable energy and energy efficiency.

He also called for modernising traditional ones such as agriculture and building efficient and targeted social safety nets for the most vulnerable in our societies.

Addressing the 46th annual CDB Board of Governors meeting here, yesterday, Smith questioned whether the vision is realistic, achievable or simply the proverbial “impossible dream”.

“I am satisfied that the success of other countries within our own hemisphere can be a reliable beacon for us. We can also find hope in the efforts of small countries, like Grenada and St. Kitts and Nevis, which, after being ravaged by natural disasters, and the resulting accumulation of large sovereign debts, have taken the bitter medicine, pursued the right policies, and are now experiencing better outcomes.

“We can also take encouragement from the green shoots now beginning to appear, right here in Jamaica. After more than 40 years of disappointing economic and social development, and after so many years of failing to capitalise on its vast endowment of natural and human capacity, there appears to be good reason to begin to exhale,” he said.

Smith reminded delegates that Jamaica had endured four years of “punishing, but impressive economic and structural reforms, requiring huge sacrifices by its people” and now it appears to be wrestling to the ground “the twin monsters of sovereign indebtedness and fiscal unsustainability that have bedeviled it for much of its years as a sovereign nation.”

He stated that many of the reforms outlined, improving the business climate have been introduced, and many more are underway.

“Private investment is now beginning to increase, nowhere more evident than in the vital tourism and renewable energy sectors, but encouragingly also, in business process outsourcing and the local manufacturing sectors.

“The ultimate success of the Jamaica project can only serve as a symbol of hope and encouragement for the rest of our region that the vision …is anything but the impossible dream,” the CDB President noted. 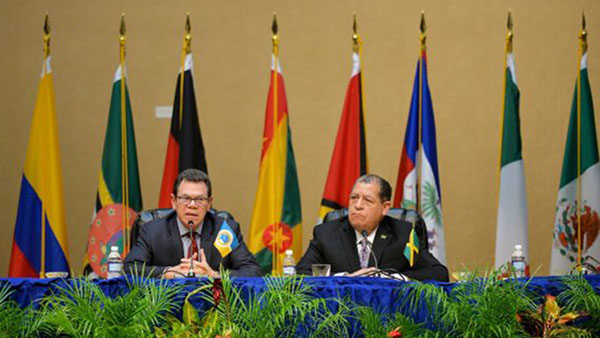 Jamaica Finance and Public Service Minister, Audley Shaw (right), listens as President of the Caribbean Development Bank (CDB), Dr. Warren Smith, addresses the closing press conference of the 46th annual meeting of the Board of Governors of the Caribbean Development Bank (CDB) on May 19 at the Montego Bay Convention Centre, in St. James. Photo credit: Yhomo Hutchinson/JIS.

“Today, our countries continue to be ranked amongst some of the world’s most highly indebted. At the end of 2015, four of our BMCs (borrowing member countries) had debt in excess of 100 per cent of gross domestic product (GDP),” he added.

Smith said that a comparison of CDB’s borrowing member countries to other groupings suggests that non-Caribbean small island developing states fared much better than they did during the global recession.

He said between 2006 and 2015, Caribbean growth rates averaged 1.5 per cent compared with 3.4 percent for other small island states.

“Small size, then, does not appear to provide a robust explanation for the Caribbean’s relatively low growth performance. Arguably, as a region, we have made progress, but we have fallen substantially short of realising our true potential.”

The CDB president said despite the challenges, the Caribbean, like all other regions of the world, has a vision that is peaceful, just, inclusive, resilient and without abject poverty.

“Having a vision is important for understanding where we want to be. But a vision is not the same thing as reality,” he said, reminding the delegates that the journey up the staircase to greater prosperity must begin with the pursuit of strategies that promote higher, more predictable and more sustainable rates of economic growth.

He said the region economic growth has not been sustained for a long enough period and “our overall five percent growth performance has consistently lagged behind the rest of the worlds’.

“Our region has grown by only 1.2 per cent per year since 2009 compared with the global average of 3.7 percent. It is estimated that Caribbean countries, principally the larger ones, will need to make the shift from current incremental rates of growth of 1.2 per cent to transformational rates of at least 5-7 per cent per annum in order to create the basis for ending abject poverty by 2030.”

He said, given the prevailing high levels of inequality, the more aggressive growth rates will also need to be accompanied by distributional policies that spread wealth more equitably and reinforced by an enlightened and efficient social policy, which targets the most vulnerable in society, mainly women and children.

He added there was also need for a stable, predictable, resilient macro-economic environment, noting “as is now more widely appreciated, a dynamic private sector-driving economic growth is a distinguishing feature of economies which have been successfully transformed.

“Perhaps less well understood is that, in this paradigm, the state does not wither away. Rather it assumes, among other things, the role of enabler by investing in growth-inducing infrastructure which is climate-proofed; retrofitting, over time, older infrastructure to make it climate resilient; achieving fiscal and debt sustainability in order to build private sector confidence; and creating a streamlined governance and regulatory framework to facilitate business activity,” he advised.

Smith said that although these are not new concepts, they warrant repetition.

“Once macroeconomic stability is achieved it has to be sustained. And business reforms need to be relentlessly pursued, taking cognisance of emerging new technologies and the changing needs of business,” the CDB chief executive said.