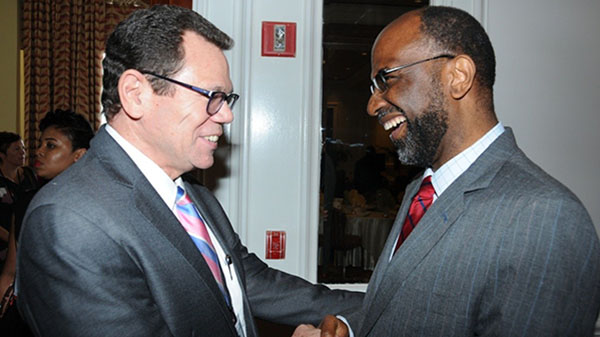 MONTEGO BAY, Jamaica, May 19, (CMC) – The Caribbean Development Bank (CDB) has been urged to play a leading role in crafting the region’s response to a growing crisis that has led to the loss of correspondent banking relationships for regional financial institutions.

General Manager of the Jamaica National Building Society (JNBS) Earl Jarrett, told the Board of Governors of the CDB that the region has been the worst affected by the issue, as pointed out by the World Bank and researchers at the Caribbean Policy Research Institute (CAPRI).

According to Jarrett, who is also a JNBS Board Member, the matter has threatened to cut off the Caribbean’s access to the global financial system.

In an address to the CDB’s Board of Governors at the Bank’s 46th annual general meeting here, Jarrett noted that the regional organisation must adopt the issue and see it as being central to its responsibility to the development of its member states.

“As the CDB considers its mandate and growth at this annual meeting, it must also deeply reflect on the economic progress of its member states.

“It must determine if there is need to adjust its sails in this world of uncertain winds, to ensure its member states that benefit from its primary services, are growing, at least, at relatively the same rate as the organisation,” the JNBS General Manager said.

He noted that the CDB’s assets had grown since establishment in 1969 from US$50 million to $US 900 million, while the economies of member countries, such as Jamaica, had barely grown two per cent since its independence from Britain in 1962.

Extolling the CDB for its valuable economic research, he suggested that the organisation should do more, through its work, to dispel the reasons for Caribbean states’ debt problem, in an effort to counter the perception of the region as corrupt and risky by international banks, which, in the final analysis, drives de-risking and severs relationships with institutions in the Caribbean.

The JNBS General Manager contended that non-state actors, especially contingent liabilities by the private sector which are later absorbed by governments, have played a critical role in exacerbating the debt burden for Caribbean countries. And, although he mentioned the impact of climate change, he carefully noted that the Caribbean’s debt issues are limited to those problems.

“It is interesting to note that minimal reference is made to the [CDB’s] study in discussions about the debt issue in the region. In fact, it seems the rest of the world would prefer to blame the debt problem on malfeasance and incompetence on the part of Caribbean leaders and politicians,” Jarrett, who is also an accountant, argued.

The de-risking of regional financial institutions is a final move by the developed world to make developing nations truly “independent,” he contended, pointing to the loss of preferential trading and the imposition of rigid visa requirements on the Caribbean, as being attempts which preceded the correspondent banking issue.

“It is now up to us to begin to craft a new response to this ‘independence’,” he urged.

“It is now up to us, to reflect on; and to accept the original intent of the CDB and CARICOM, so that the region can begin to understand that we need to recognise that now that Europe has finally ended the special relationship we enjoyed, we must now look to each other,” he added.

Jarrett, also the Chair of the JNBS Foundation, outlined several initiatives that should be implemented in order to achieve growth, including moving to urgently negotiate as a single trading bloc, and create the space for the region’s private sector to meet and exchange ideas and programs to drive the Caribbean’s progress.

He also suggested that the region develop a secure “Schengen visa”-type immigration system to facilitate easy movement between countries, similar to what obtains in Europe; as well as, give consideration to establishing a regional financial institution in major trading markets to support Caribbean people in the trade of their goods and services.