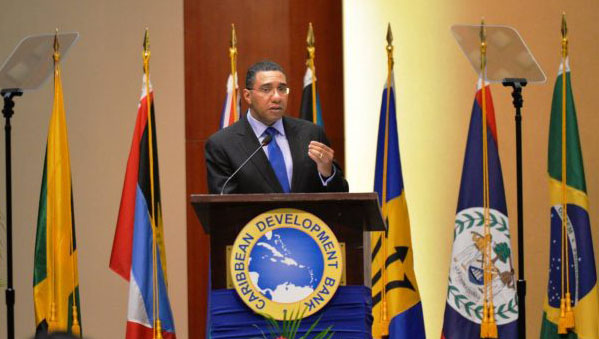 Jamaica Prime Minister, Andrew Holness, addresses the opening ceremony of the 46th annual meeting of the Board of Governors of the Caribbean Development Bank (CDB) at the Montego Bay Convention Centre in St. James on Wednesday (May 18). Photo credit: Yhomo Hutchinson/JIS.

Addressing the 46th annual Board of Governors’ meeting of the Barbados-based Caribbean Development Bank (CDB), Holness said that it was necessary, as Jamaicans would say, “to ride and whistle and probably chew gum at the same time”.

He said Jamaica has made important strides in its debt reduction program and the economy has also shown that “such strategies in isolation are not sufficient”.

Holness, who led his Jamaica Labour Party (JLP) to power following the February 25 general elections, told the delegates that, given fiscal limitations, growth cannot be stimulated by counter-syndical spending.

“Instead growth has to be led by a risk thinking and dynamic private sector. However this does not often happen automatically, and the governments of the region need to pursue policies that improve enabling environments, remove distortions, attack corruption, improve labour productivity, improve national security and attract greater foreign investment,” he suggested.

Holness acknowledged that “this is no easy task” noting that the CDB has a crucial role to play in the transformation of thought and policy that is required.

“Some correctly postulate which comes first. Is it debt reduction or is it growth? Can the twin objectives be simultaneously achieved? The answer is yes, however they won’t be achieved through conventional thinking and incremental measures,” he added.

He told the meeting that “bold and innovative thought is required. Thought that leverages the strength of our international development partners and the enduring fabric of our bilateral relationships.

“While debt forgiveness is not on our policy making, for emphasis let me repeat, the region cannot consider a strategy of debt forgiveness. However a debt for policy swap could be one way in which we could creatively look at reducing the high levels of debt that plague the region.”

Holness said that while the region relies on investment for growth “we must also concentrate resources on policies that transform our domestic economy; policies that reduce public bureaucracy, reform our tax systems, promote economic efficiency and broaden access to finance and ensure financial inclusion”.

He said that the CDB has a role also in this new paradigm, in helping the region to think through reform to its institutions that favour increased trade among its member states and policies that maximise the use of the region’s productive assets, chief among (them) being, the people of the region.

“CDB must also focus on strategies for the diversification of the regional economy, consistent with our comparative and competitive advantages,” he advised.

Holness said that the Caribbean region is definitely poised as the next region to transition from developing to developed.

“We have everything in our favour. The greatest obstacle would be our high debt and this is where greater thought is needed in policy options to help us to transition,” he said, adding that the CDB, with its illustrious line of thinkers, “must spend more time, more effort, more resources and thinking through the solutions to this one major existential threat to our transitional from developing to develop”.

In his address to the meeting, outgoing CDB Board of Governors’ Chairman and the host country’s Finance Minister, Audley Shaw, said the meeting was taking place at a time of great “excitement” for the region. 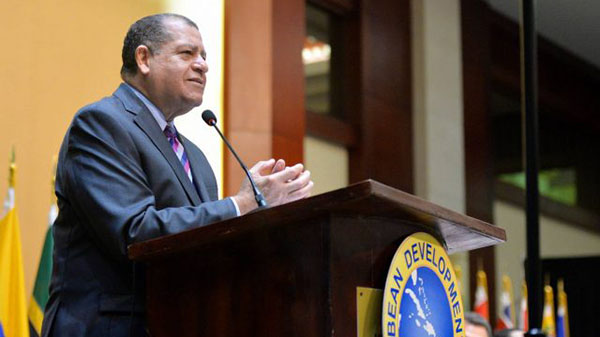 “The global and contextual challenges facing Caribbean countries are no doubt well known, but several bear repetition. There is weaker growth in the global economy,” he said, noting that recent additions of the International Monetary Fund (IMF) economic outlook have repeated the prognosis that global economic growth are unlikely to return to the pre-2008 crisis level.

He said the situation possesses challenges for the Caribbean, including a decline in commodity prices.

“The magnitude of the decline in oil prices in particular, has, on balance, benefitted Caribbean economies positively even as we recognise some of our neighbours, Trinidad and Tobago and Suriname in particular, who would have been negatively affected by the oil price decline.

“This highlights the need for the Caribbean countries to grasp the opportunity to use the breathing space of relatively low oil prices to undertake meaningful reforms in the energy sector that will increase the resilience of our economies to oil price shocks,” Shaw said.