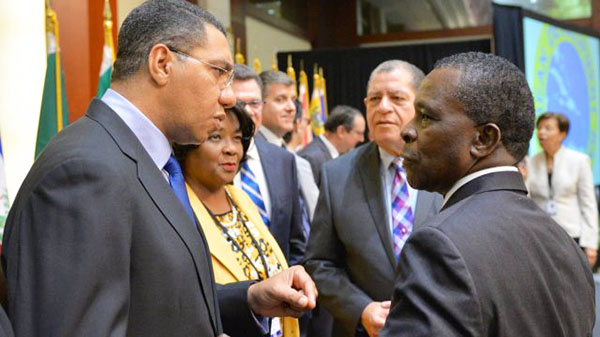 Jamaica Prime Minister, Andrew Holness (left), in discussion with Grenada’s Prime Minister, Dr. Keith Mitchell (right), at the Caribbean Development Bank’s (CDB) Board of Governors Meeting at the Montego Bay Convention on May 18. At centre is Jamaica's Minister of Finance and Public Service, Audley Shaw. Holness is pursuing a debt swap initiative with the World Bank, similar to one that Mitchell has approached Germany about. Photo credit: Garwin Davis/JIS.

The Washington-based financial institution said that Familiar, who was attending the annual board of directors meeting of the Barbados-based Caribbean Development Bank (CDB), had congratulated Jamaica for its commitment to “good macro-economic policies” and expressed his conviction that, with continued reforms, Jamaica is “on the right path for accelerating growth”.

The World Bank said that as part of its country partnership strategy, it is providing Jamaica with US$510 million, over 2013–2017, to support the island in changing its growth trajectory and boosting private sector development and competitiveness.

The bank said the funds also come with support in transitioning to clean energy, a regional initiative to provide new skills and jobs for the youth in the animation and digital economy, and efforts to improve social and climate resilience in the country.

During the meeting, the World Bank said Holness and Familiar agreed to develop a new project on access to finance, to support credit to Small and Medium Enterprises (SMEs) and on new innovative financing initiatives, including a debt for nature and resilience swap and a policy-based guarantee.

As part of the government’s active debt management strategy, the World Bank said it is exploring with other partners an innovative debt swap initiative to improve the country’s debt profile, while strengthening environmental sustainability and climate resilience.

The Jamaican leader and the World Bank Vice President also discussed the possibility of using budget support in the form of a policy-based guarantee to leverage additional funding from the market.

In addition, Holness has asked the World Bank to bring knowledge, expertise and experiences from other countries that have faced similar challenges and had successful transitions to sustainable growth, the statement said.

Familiar reaffirmed the commitment and support of the World Bank Group to Jamaica in pursuing its ambitious growth agenda, the bank said.

Meanwhile, in the Jamaica Budget debate, Leader of the main opposition People’s National party (PNP), Portia Simpson Miller, has criticized the Andrew Holness-led administration of deceiving the country and breaking its promise of no new taxes to fund the election promise of increasing the income tax threshold. 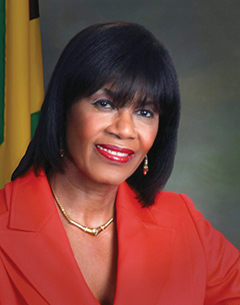 In her contribution to the 2016/2017-budget debate in Parliament, yesterday, the former Prime Minister also said the revenue that the government expects to raise from new taxes will not be realised.

She commented, “Now every man, woman and child is paying for that promise. We had warned that the promise to abolish income tax for every Jamaican, who earns $1.5 million (One Jamaica dollar =US$0.008 cents)or less, was not feasible. We said there was no funding in place to make this possible without new taxes…..what concerns me most is the impact this will have, particularly, on the most vulnerable. I speak of that unemployed single mother with her children to support….”

Simpson Miller said with Jamaica being at a delicate stage of recovery the budget threatens to derail the process.

“We left them there with adequate funding,” Simpson Miller stated, saying that the administration is “a government of announcements”, which are not linked to formal policy and the funds to support those policies.

The government has introduced a J$13.5 billion in new taxes to fund the increase in personal income tax.

Simpson Miller also voiced concern about the budgetary allocation for security, stating that the decision to spend J$500 million less on the police in vital areas, is a bad idea.

The opposition leader also questioned why the government would “reduce the systematic provision to the security forces for essential items, such as bullet proof vests and weapons, at a time when the murder situation is a cause of great concern”.

Concerning education, she pointed to announcements of changes to the school feeding program and the addition of years to the secondary school system, stated that they were not reflected in the budget.

“The reality for the country is that an underfunded education system will set back the tremendous gains of the past four years. It is time for Jamaica to, again, have a national consultation on education and arrive at a consensus for the preservation of its gains and the correction of its problems,” she said

Prime Minister Andrew Holness will make his contribution to the debate, next Tuesday, and the debate will be closed the following day by Finance Minister, Audley Shaw.