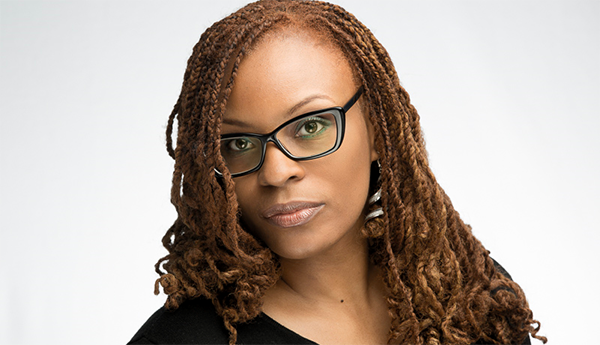 Anne-Marie Woods aka Amani just had one of her life long dreams come into fruition when her new play She Said/He Said had its World Premiere April 13th – May 1st at the MAI in Montreal – produced by Black Theatre Workshop (BTW) and directed by Artistic Director of BTW, Quincy Armorer. And now she gets to bring her new play “down home”, as they say, to the place where she started her career as an actor, playwright, singer and arts educator. She Said/He Said will have its Nova Scotia Debut as part of Eastern Front Theatre’s STAGES Theatre Festival June 15th, 17th, 18th and 19th.

Woods’ new play takes a comedic, complex and poetic look at Black Love in Toronto through the eyes of two characters; SHE and HE. Set to a poetic score of monologues, original songs and dramatic scenes, this new script fuses spoken word, theatre and music to take the audience on a sometimes beautiful and sometimes turbulent journey of love.

SHE (played by Woods) is from Nova Scotia with West Indian parents and HE (played by newcomer Toronto actor Neville Coke) is from Toronto. The two main characters struggle to try and make their relationship work despite their past hurts and present day struggles.

Woods’ career started out in Nova Scotia with her 12 ½ years of singing with acapella sensation Four The Moment and her many years of being a Fringe Festival Hit as well as her years doing Arts Education outreach. Since leaving Nova Scotia 16 years ago to move to Toronto she has never forgotten the place that is still home in her heart and has come back to perform in festivals, showcases, and to teach arts education workshops at any available opportunity. She had a very successful staged reading of She Said/He Said at Prismatic Arts Festival in 2014 and spent the past year developing her new script for the Montreal World Premiere.

I could sit around and complain about the plight of the Black woman and being single for hours… but that makes no sense to me. However, creating a script that poetically challenges the conventions of traditional theatre – now that makes sense. A script that tackles the stereotypes of Black men and women and looks at love through their eyes; is a story that is not told enough on the Canadian Stage. #BlackTheatreMatters – says Woods.

Marilla Steuter- Martin of Broadwayworld.com says, “On top of a strong script, which often uses jumps in time and character asides to progress the action along, the play benefits tremendously from its use of spoken word. Woods deserves credit for the composition and elegance with which she seamlessly integrates these moments into the regular dialogue and fabric of the show. The instances of lyrical monologue provide a refreshing change of pace from its overall reliance on stationary dialogue.”

The Montreal World Premiere starred actors Mariah Inger and Christian Paul and it received Great Reviews. And now she’s more than thrilled to be part of the STAGES Theatre Festival June 15th – 19th in Halifax, Nova Scotia through Eastern Front Theatre. Woods will perform at the Sir James Dunn Theatre the first place she performed professionally while studying at Dalhousie Theatre.

But, Woods is also going to be doing much more on her 2 weeks in Nova Scotia. She will be teaching her Power to Change Literacy Program at Enfield District Elementary School to the grades 3 and 4 students on June 7th and she will also be reading her new script in development Scotian Journey about a young lady returning home for the Africville Reunion at the Halifax Central Library on June 9th.

Woods has been producing and directing musical and theatrical showcases and performing spoken word but she has not done a theatre production since 2006 – so STAGES Theatre Festival marks her return to the theatrical stage. She is also in the process of fundraising and grant writing to self-produce She Said/He Said in Toronto September 15th – 18th at AKI Studio Theatre – Native Earth Performing Arts.

This may sound like a lot to the average person, but this is just a day in the life of Anne-Marie Woods aka Amani – Playwright, Artspreneneur, Innovator, Multi-disciplinary Artist, Artist Educator and Creative Consultant.