New in Pride
Home / Commentary / What Does It Mean To Be A “Real Man”? 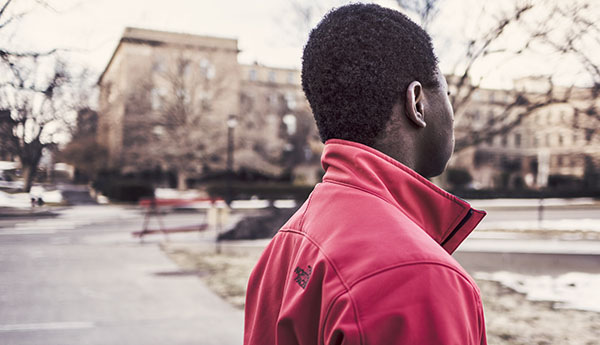 “Sticks and stones may break my bones, but words will never hurt me.”

This catchy phrase immediately transports me back to elementary school. I can almost hear the children’s laughter, feel the hot sun on my face, smell the sickly sweet candy in the air again.

I remember hearing my peers recite it during the best time of the day. You guessed it… recess! I, too, am guilty of reciting this memorable children’s tune. It was our defence against the many words spewed across the playground. As long as I say it over and over again, the words can’t hurt me. No…they won’t hurt me!

“Sticks and stones may break my bones, but words will never hurt me.”

“Sticks and stones may break my bones, but words WILL never hurt me.”

“Sticks and stones may break my bones, but words WILL never hurt me!”

They’re just words… right? You can push me, punch me, kick me. The physical blows hurt, but the emotional insults won’t. So, why do I feel hurt? Words hurt!

If a child believes that words cannot harm them, yet they still feel hurt, how can they then begin to understand their true feelings? This seemingly harmless phrase calls for a child to welcome denial of their true emotions and be utterly ignorant. Once a person repeatedly buries their feelings, the suppression becomes habitual which can lead to more serious matters like stress, anxiety, or mental illness.

“Don’t be a pussy!” I’m sure you’ve all heard this or have been on the receiving end of it. Hey, I’ll even admit I’ve said it a few times out of jest. We all have our own lingo when it comes to interacting with our family and friends; however, what we cannot control is how our words are received. Just because you meant something in a joking manner doesn’t mean it’ll be received that way.

I recently just watched a compelling documentary on Netflix called The Mask You Live In. The documentary tackles these kinds of issues faced by boys and men specifically. According to the website, “The Mask You Live In follows boys and young men as they struggle to stay true to themselves while negotiating America’s narrow definition of masculinity.” If you haven’t seen it already, I urge you to watch it.

The Mask You Live In is presented by the non-profit organization, The Representation Project. The Representation Project “inspires individuals and communities to challenge and overcome limiting stereotypes so that everyone, regardless of gender, race, class, age, sexual orientation, or circumstance, can fulfill their human potential.” I think this is such an important cause.

Boys are constantly reminded to “man up”, “be a man”, “don’t be a pussy”. Media, family, friends, and peers push these skewed ideologies of what it is to be a “real man”. Now these boys grow up into “real men” unable to connect with and express their emotions for fear of being labeled a “pussy” or “gay”. What kind of messages are we sending? “Real men” shouldn’t talk about their feelings, or say “I love you”, or even worse, cry? “Real men” are the strong, silent type? How ridiculous.

Boys need to be taught that it’s okay to express their emotions. It’s more than okay, it’s healthy in fact. It doesn’t make you “weak”, “gay”, “effeminate”, or a “pussy” – quite the opposite. I believe that expressing the way you truly feel takes strength and shows pride (pun intended) in who you are. The fact that you are willing to show vulnerability and shatter those perceived societal norms shows real resilience.

Last month, former NFL player and LGBTQ activist Wade Davis II spoke at a TEDx Talk event about what he calls “The Mask of Masculinity”. To say the speech moved me is a total understatement. Davis urges us to reassess our definitions of what “masculinity” is. “…we raise young boys to wear a mask of toughness in order to be a man and we rob them of their childhood and innocence,” Davis proclaims.

Towards the end of the speech he says that “the root of homophobia is sexism”. Cue the mic-drop! My inner feminist and equality advocate was grinning from ear to ear after that one-liner. In an interview with the Huffington Post, Davis adds what he meant by the statement:

The real issue is, most individuals, who have a problem with someone who is gay, frame us as being ‘feminine’, as being ‘weak’, as being ‘less than a man’ — which is the language of how we talk about women.

YOU SAID IT! I won’t go into my thoughts on women and equality rights though because that’s a whole ‘nother article!

My point is this… let’s scrap the perpetuation that only physical blows hurt and the verbal ones don’t. Let’s trash the age-old societal ideologies of what makes a man a “man” or what makes a woman a “woman”. Yes, we are all unique and we should celebrate that fact, but let’s also remember that in the end we all have one thing in common…we’re human. So let’s show our humanity.