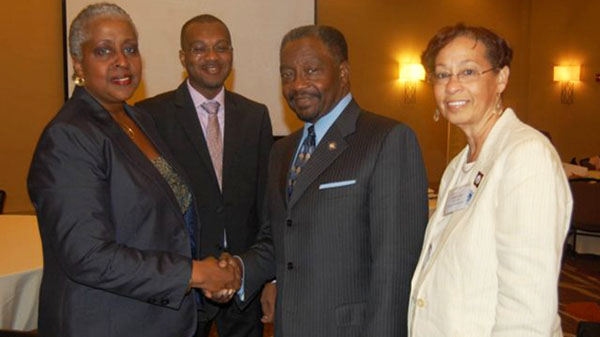 Director of Diaspora And Consular Affairs in the Ministry of Foreign Affairs and Foreign Trade, Ambassador Sharon Saunders (left), is greeted by Assistant Speaker Pro Tempore of the New York State Assembly, Jamaica-born Nick Perry (right). The occasion was the opening of the two-day Jamaica Diaspora North East Regional Conference at the Hilton New York JFK Hotel in Queens on June 10. Others sharing the moment (from 2nd left) are: Assistant Director Of Diaspora Affairs in the Ministry, Lincoln Downer; and Immediate Past President of the Union of Jamaican Alumni Associations, Karlene Largie. Photo credit: Derrick Scott/JIS.

She informed the audience, that the government is analysing best practices from a number of countries with a view to having Jamaicans living in the Diaspora being able to vote.

“We have obtained information from countries that have already implemented this framework, and we are now in the process of analysing various options, which would be deemed to be in the best interest of Jamaica and you our Diaspora,” she said. 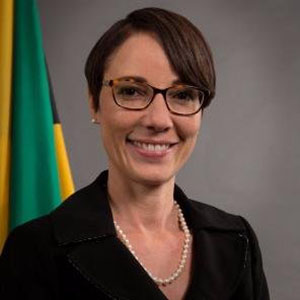 Senator Johnson Smith said that following consultations, the matter will be placed before Parliament.

She noted that the government will re-establish and reconvene a joint select committee of the Houses of Parliament on Diaspora matters, in order to elevate the relationship with overseas nationals.

The Minister said there is no denying that Diaspora engagement and involvement have tremendous potential to bolster Jamaica’s economic advancement.

“It is essential, therefore, that our relationship be further strategically streamlined to maximise the value of the Diaspora’s contribution to Jamaica’s national development and, in particular, towards the attainment of economic growth and job creation,” she pointed out.