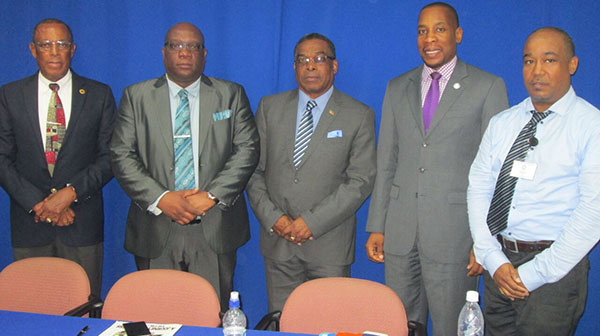 BASSETERRE, St. Kitts-Nevis, June 13, (CMC) – The Organisation of Eastern Caribbean States (OECS) yesterday, celebrated its 35thanniversary with the incoming chairman, Dr. Timothy Harris, saying “it represents a beacon on the hill to the process of regional integration”.

Harris’ comments were made at yesterday morning’s media launch that linked OECS representatives in St. Lucia with the press video conference participants who were at the Eastern Caribbean Central Bank (ECCB) in St. Kitts.

Samuel Berridge, Senior Foreign Service Officer in the Ministry of Foreign Affairs, and Ian Liburd, Minister of Public Infrastructure, were also in attendance and journalists from across the OECS were linked up by video conferencing.

Harris, the Prime Minister of St. Kitts-Nevis, said that the sub-regional grouping has played a significant role in the lives of the population of the islands through the creation of an effective single space, as well as providing the appropriate mechanisms for policy harmonisation.

He said the OECS also provides an avenue for “the exchange of ideas on the subjects that fall under its purview, but also an effective launching pad for us to consider strategies for strengthening existing areas of cooperation, and examining new areas of cooperation”.

The anniversary celebrations are being held under the theme: “OECS at 35—Connecting People, Integrating Ideas, Moving Forward”, and Harris, stated “the OECS Economic Union provides the platform for the integration of ideas regarding the contour and direction of our regional integration process”.

He added that the integration of ideas must be expansive and inclusive of the United Nations sustainable development agenda.

“In short, the discussions must achieve a balance in treatment of economic development, social cohesion, and environmental protection with a view to ensuring a stronger economic space,” the OECS chairman noted.

“Our harmonized and coordinated response to matters of aviation, telecommunications, the judiciary and common currency has borne dividends, including efficiency and effectiveness in the handling of these matters than would be derived by our individual country efforts.

“Working together we have created one of the world’s most stable currencies. Equally, we, through our pharmaceutical procurement mechanisms, have achieved the most affordable drugs for our people. Regionalism has been people-centred and our people in the OECS are better for it,” Prime Minister Harris said.

He also praised the “hard work, dedication and commitment” of the staff at the St. Lucia-based OECS Commission, whom he said continue to ensure that “our governments and peoples partner in, and extract joint benefit from, such critical development focus areas as pharmaceutical services, tourism, trade, agriculture, competitive business and regional integration”, while praising also the recently launched OECS Youth Development Strategy. 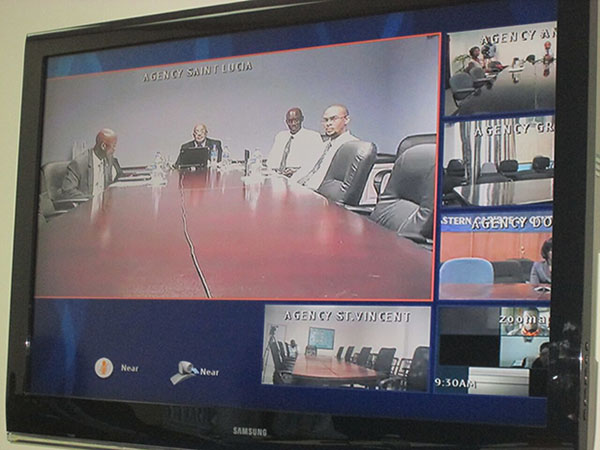 Video conference monitors shows OECS officials in St. Lucia (large monitor) and journalists from across the Caribbean (other monitors).

Harris said that the sub-regional grouping has played a significant role in allowing for the free movement of goods and services, describing it as one of the key ways in how people within the OECS remain connected.

“Trading relationships and networks are built on the premise that both exporter and importer would benefit from their respective business transactions, generating economic activity through the creation of employment and linkages with other economic and social sectors,” he said, adding that the OECS should consider “the establishment of an institutional framework to provide exporters with the ability to extend favourable credit terms with persons and entities with whom they trade.

“Indeed, there are cases where our manufacturers are competitive in price and quality, but fail in their ability to offer credit. This is one area of deficiency which needs to be corrected if we are to achieve our full potential in our free movement of goods regime,” he said.

Harris pledged to “provide the impetus to ensure that the sub-region achieves its fullest potential in the field of trade in goods and services,” and encouraged the sub-regional governments to continue to commit themselves to strengthening the Economic Union, helping small and medium-sized businesses, and engaging and involving young people in every way, especially in arts and culture.

“Our OECS Economic Union in many ways can be regarded as a stepping stone to the further deepening and strengthening of the CSME (CARICOM Single Market and Economy). Our vast experience particularly in the field of fiscal and monetary policy harmonization is one area which can be highlighted in this regard,” he said.

Prime Minister Harris said that the OECS in moving forward, should seek to define the strategic goals regarding the effective functioning of the OECS Economic Union as well as initiate discussions on the advancement of a political union in the sub-region.