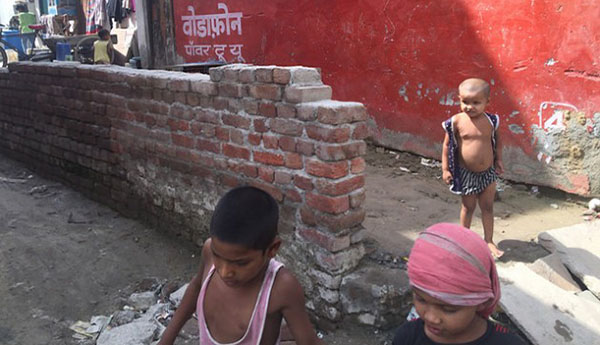 Children from rural areas and disempowered homes are ideal targets for trafficking in India and elsewhere. Credit: Neeta Lal/IPS.

NEW DELHI, Jun 20 2016 (IPS) – Sunita Pal, a frail 17-year-old, lies in a tiny bed in the women’s ward of New Delhi’s Ram Manohar Lohia Hospital. Her face and head swathed in bandages, with only a bruised eye and swollen lips visible, the girl recounts her ordeal to a TV channel propped up by a pillow. She talks of her employers beating her with a stick every day, depriving her of food and threatening to kill her if she dared report her misery to anybody.

“I worked from 6am until midnight. I had to cook, clean, take care of the children and massage the legs of my employers,” Sunita recounts to the journalist, pain writ large on her face. “In exchange, I got only two meals and wasn’t even paid for the six months I worked at the house. When I expressed a desire to leave, I was beaten up.”

Sunita is one of the fortunate few who got rescued from her hell by an anti-slavery activist and is now being rehabilitated at a woman’s home in Delhi. But there are millions of Sunitas across India who continue to toil in Dickensian misery for years without any succour. Trafficked from remote villages to large cities, they are and sold as domestic workers to placement agencies or worse, at brothels. Their crime? Extreme poverty and illiteracy.

The Global Slavery Index released recently by the human rights organisation Walk Free Foundation states that globally, India has the largest population of modern slaves. Over 18 million people are trapped as bonded labourers, forced beggars, sex workers and child soldiers across the country. They constitute 1.4 percent of India’s total population, the fourth highest among 167 countries with the largest proportion of slaves. The survey estimates that 45.8 million people are living in modern slavery globally, of which 58 percent are concentrated in India, China, Pakistan, Bangladesh and Uzbekistan.

According to the National Crime Records Bureau (NCRB), trafficking of minor girls — the second-most prevalent trafficking crime in India – has surged 14 times over the last decade. It increased 65 percent in 2014 alone. Girls and women are the primary targets of immoral trafficking in India, comprising 76 percent of all human trafficking cases nationwide over a decade, reveals NCRB.

As many as 8,099 people were reported to be trafficked across India in 2014. Selling or buying girls for prostitution, importing them from a foreign country are the most common forms of trafficking in India, say experts. Sexual exploitation of women and children for commercial purposes takes place in various forms including brothel-based prostitution, sex-tourism, and pornography.

Last year, the Central Bureau of Investigation unearthed a pan-India human trafficking racket that had transported around 8,000 Indian women to Dubai. Another report about a man who trafficked 5,000 tribal kids from the poor tribal state of Jharkhand also caught the public eye.

Equally disconcerting are thousands of children which go missing from some of India’s hinterlands. Between 2011 and 2013, over 10,500 children were registered as missing from Chhattisgarh, one of India’s poorest tribal states. They were trafficked into domestic work or other forms of child labour in cities. Overall , an estimated 135,000 children are believed to be trafficked in India every year.

Experts point to the exponentially growing demand for domestic servants in burgeoning Indian cities as the main catalyst for trafficking. A 2013 report by Geneva-based International Labour Organization found that India hosts anywhere from 2.5 million to 90 million domestic workers. Yet, despite being the largest workforce in the country, these workers remain unrecognized and unprotected by law.

This is a lacuna that a national policy in the pipeline hopes to address. Experts say the idea is to give domestic workers the benefits of regulated hours of work with weekly rest, paid annual and sick leave, and maternity benefits as well entitlement of minimum wages under the Minimum Wages Act of 1948.

“Once these workers come under the ambit of law,” explains New Delhi-based human rights lawyer Kirit Patel, “it will be a big deterrent for criminals. But till then, domestic workers remain easy targets for exploitation.”

Not that human trafficking is a uniquely Indian phenomenon. The menace is the third-largest source of profit for organised crime, after arms and drugs trafficking involving billions of dollars annually worldwide, say surveys. Every year, thousands of children go missing in South Asia, the second-largest and fastest-growing region in the world for human trafficking after East Asia, according to the UN Office for Drugs & Crime.

One of the pioneering strategies adopted at the conference was to set up a toll-free helpline and online platform to report and track missing children. “We need to spread the message to support rescue efforts and rehabilitate victims. With the rapid advance of technology and a fast-changing, globalized economy, new threats to children’s safety are emerging every day,” said India’s Home Minister Rajnath Singh at the conference.

Rishi Kant, one of India’s leading anti-trafficking activists, says it all boils down to prioritizing the issue. “For poor Indian states, providing food, shelter and housing assume far greater importance than chasing traffickers. Besides, many people don’t even see trafficking as a crime. They feel it’s an opportunity for impoverished children to migrate to cities, live in rich homes and better their lives!”

Initiatives like anti-trafficking nodal cells — like the one under the Ministry of Home Affairs — can be effective deterrents, say experts. The ministry has also launched a web portal on anti-human trafficking, while the Ministry of Women and Child Development is implementing a programme that focuses on rescue, rehabilitation and repatriation of victims.

But the best antidote to the menace of human trafficking, say experts, is a stringent law. India’s first anti-trafficking law — whose draft was unveiled by the Centre recently — recommends tough action against domestic servant placement agencies who hustle poor children into bonded labour and prostitution. It also suggests the formation of an anti-trafficking fund.

The bill also makes giving hormone shots such as oxytocin to trafficked girls (to accelerate their sexual maturity) and pushing them into prostitution a crime punishable with 10 years in jail and a fine of about 1,500 dollars. Addressing new forms of bondage — such as organised begging rings, forced prostitution and child labour — are also part of the bill’s suggestions.

Once the law is passed, hopefully, girls like Sunita will be able to breathe a little easier.