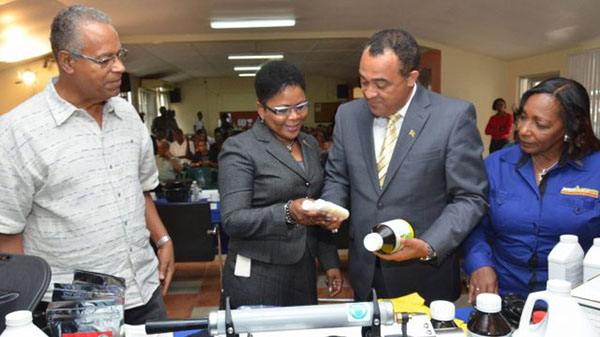 Minister of Health, Dr. Christopher Tufton (third left), along with (from left) Chairman of the Board of Hardware and Lumber Ltd., Erwin Burton; Chief Executive Officer, Donna Duran; and General Manager of AgroGrace, Olive Downer-Walsh, at a briefing at the company’s Spanish Town Road offices, yesterday. They are observing products being carried by the company which are used in vector control management. Photo credit: Dave Reid/JIS.

KINGSTON, Jamaica, June 22, (CMC) – The Jamaica government has endorsed the importation of two products, by a local company, to be used in the control of mosquitoes and lead to the eventual reduction of vector-borne disease transmission, such as Zika.

The company is now offering a tool, known as the In2Care Mosquito Trap, which attracts and kills the Aedes aegypti mosquito, responsible for the spread of the Zika virus as well as a liquid mosquito film, called the Aquatain AMF.

Health Minister, Dr. Christopher Tufton, speaking at a ceremony to launch the products, said that they are necessary to complement the efforts being made by the government and other stakeholders in the control of the virus and other vector-borne diseases.

The In2Care mosquito trap can be used indoors and outdoors and is a plastic container which uses water with an odour to attract the mosquitos, which come into contact with specially treated gauze in the container and are contaminated with a larvicide and a fungus, which prevent them from transmitting any disease.

The mosquito then distributes the contaminant to multiple breeding sites when they fly out, before they die. The trap is to be set up by a professional.

The Aquatain AMF liquid mosquito film is used to control mosquito larvae in stored, stagnant and large bodies of water. A few drops of the non-toxic substance will spread across the water, forming a thin layer which traps and kills mosquito larvae and pupae.

The announcement of the new products comes as Jamaica disclosed that two more pregnant women have contracted the Zika virus, which has been linked to severe birth defects.

Acting Chief Medical officer, Winston De La Haye, said the number of cases of pregnant women with the virus is now four, and all have all been referred to a high-risk clinic.

Dr. De La Haye added that the number of confirmed cases of Zika in Jamaica had increased to 24. Additionally, there were 1,788 suspected cases.