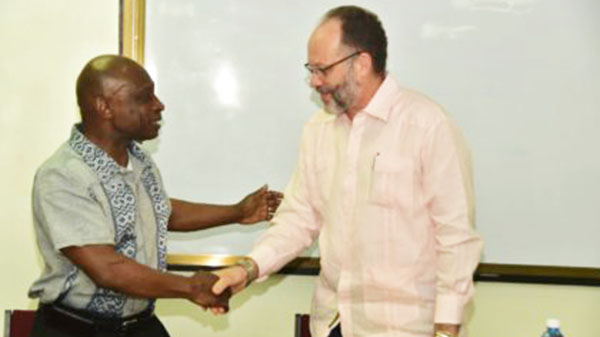 Guyana Minister of Foreign Affairs, Carl Greenidge, left, greets CARICOM’s Secretary General, Irwin La Rocque, before the start of a media briefing session, last Saturday, ahead of the 37th Regular Session of Caricom Heads of State and or Government, slated for July 4-6 in Georgetown.

GEORGETOWN, Guyana, June 25, (CMC) – Last Saturday, Guyana acknowledged that the 15-member Caribbean Community (CARICOM) grouping still needs “to do a lot more” to strengthen its effectiveness, but said it remains relevant to the development of the region.

Foreign Affairs Minister, Carl Greenidge, speaking ahead of the 37th CARICOM Summit, which Guyana is hosting July 4-6, said that stronger mechanisms, dialogue and greater awareness are among some of the efforts CARICOM needs to undertake to ensure its continued effectiveness.

CARICOM’s relevance has become more of an issue following Britain’s vote to exit the European Union (EU) and statements, made in Jamaica, regarding the regional integration grouping.

“I don’t see that it has any relevance to the maintenance of CARICOM as a unit. It has no relevance in that regard,” Greenidge said of the British vote.

Greenidge noted that Brexit, as the British referendum was popularly known, was a complex issue, but does not foresee the leave from the EU affecting Guyana’s standing agreements with Britain.

Regarding CARICOM, Greenidge said “it is an issue that is relevant to the sharing of benefits, to the extent that mechanisms are not in place to ensure that benefits accrued into one country, or to one sector, can be shared; then it does act as a sort of a drag on attempts to integrate.”

He said CARICOM needs to ensure that member states “find it worth their while” being a part of the unit.

“You need to put in place institutional arrangements that make it possible for all of them to pool their natural and human resources,” Greenidge said, noting that it is for this reason, that the CARICOM Single Market and Economy (CSME) that allows for free movement of skills, goods, labour and services across the region, was envisioned to strengthen the region.

Greenidge said that while significant effort has been put forward by the region in opening its market, a “great deal remains to be done”.

Greenidge noted that many CARICOM countries are unwilling to go the final steps, adding, this is an on-going problem for CARICOM.

“The CARICOM market in goods remains reasonably close to a single market,” Greenidge said, noting that fears among member states, coupled with national policies, have restricted the completion of a single economy.

The CARICOM market in services, financial services and the like is not yet complete,” said Greenidge, adding, “finding appropriate mechanisms for dialogue at the policy level and also encouraging citizens to engage in dialogue across the boards… are the ways, I think, (that) will prove most effective”.

But despite these challenges, Greenidge points to some positives.

“We are able to sell into the market rice, ground provisions and vegetables, fish products and the like which bring income,” Greenidge said, adding that without CARICOM “there would be less trade between the countries, there would be lower incomes generated.

“We have tried, I believe, on as many fronts as possible, to pursue not only to strengthen the membership, but also by providing leadership,” Greenidge said of Guyana’s role within CARICOM, adding that Georgetown supports the initiatives that are intended to defend CARICOM’s interests.