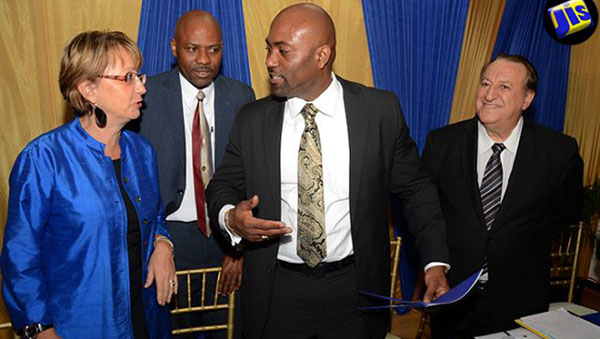 Minister of Science, Energy and Technology (MSET), Dr. Andrew Wheatley (right), in discussion with Country Manager of the World Bank, Galina Sotirova (left), at the official launch of the Open Data Portal, on June 24, at the Petroleum Corporation of Jamaica (PCJ), in Kingston. Others are (from left): Director, Technology, Gary Campbell and Chief Information Officer, Louis Shallal. Photo credit: Michael Sloley/JIS.

The portal is easily accessible by the public and forms part of the government’s transformation initiative, which makes government data available online in machine readable form, using open source software.

In his address at the launch, held at the Petroleum Corporation of Jamaica (PCJ), in Kingston, on June 24, Minister of Science, Energy and Technology, Dr. Andrew Wheatley, said this will promote active engagement among the government, citizens and businesses.

“The main objective of open data is the government connecting with the people, reversing the bureaucracies that impede national advancement. The establishment of the open data framework opens the door for opportunities for the country,” the Minister said.

“Not only does this signal our commitment to good governance, transparency and improved public service, it also provides an opportunity for us to boost the economy,” Dr. Wheatley added.

In her remarks, Country Manager of the World Bank, Galina Sotirova, said the portal facilitates greater and more convenient public access to government data, particularly for utilisation in entrepreneurial ventures, deemed potentially capable of generating billions of dollars for the economy. 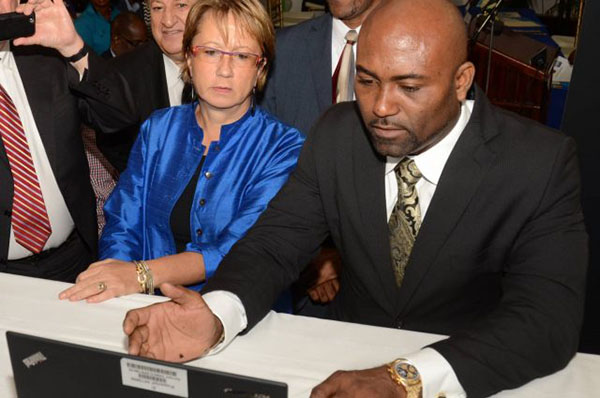 Minister of Science, Energy and Technology (MSET), Dr. Andrew Wheatley (right), uses a laptop to access the Open Data Portal at its launch on June 24, at the Petroleum Corporation of Jamaica (PCJ), in Kingston. Country Manager of the World Bank, Galina Sotirova (left), looks on. In the background (from left) are: Chief Information Officer in the Ministry, Louis Shallal and Director, Technology, Gary Campbell. Photo credit: Michael Sloley/JIS.

“With this wider availability, the information will be contextualized and converted into useful information. This information provides insight that drives innovation,” she noted.

Sotirova said private sector interests will benefit greatly from the initiative and noted that entrepreneurs in technology industries will be able to use the data to drive their businesses.

Persons may access the Open Data Portal at: data.gov.jm.

In addition to the portal, an Open Data Policy is being developed and a series of training conducted to build capacity among government officials to manage the portal.

Dr. Wheatley also disclosed that Jamaica is currently ranked 37 out of 122 countries on the Global Open Data Index, moving from 61 two years ago.

In his remarks at the ceremony, Dr. Wheatley commended the Ministries for their effort, which has resulted in Jamaica achieving such an impressive climb on the global open data index.

The Minister said the launch of the open data portal will further increase the country’s open data ranking.

“I believe that by embarking on this new initiative, we will be ranked with the trendsetters,” he added.

The portal is an initiative of the Ministry and forms part of the Government’s Transformation Initiative.

The initiative is supported by the United Kingdom’s Department for International Development, in collaboration with the World Bank.