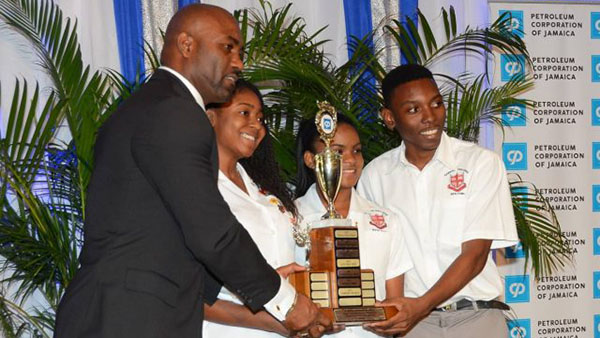 KINGSTON, Jamaica, June 27, (JIS) — Young Jamaicans have been urged to join the energy revolution and pursue careers in the renewable industry.

Making the call, Minister of Science, Energy and Technology, Dr. Andrew Wheatley, says meeting the global demand for renewable energy by 2030, could result in 24 million jobs worldwide, and Jamaica’s youth need to be part of that development.

The Minister, who was delivering the keynote address at the Petroleum Corporation of Jamaica (PCJ) Schools Energy Program awards ceremony, held on June 24 in Kingston, said renewable energy is “ideal for the infusion of these young and creative minds.”

Emphasising that energy “holds tremendous possibilities for the world,” the Minister told the audience that the “best of energy is yet to come”.

“I am pleased that the PCJ is doing its part in ensuring that Jamaica and our people are well positioned to take full advantage of the possibilities in energy,” he added.

Dr. Wheatley urged participants to use the knowledge they gained during the program and “become good stewards of the environment and energy”.

“Explore various avenues in science, energy and technology to make the change that we need in the world,” the Minister added.

He said the PCJ’s energy program is an investment in the future leaders, as it will stimulate their minds for the building of a culture of “Science, Technology, Engineering and Mathematics (STEM), from an early age.”

Over $2 million was awarded to 30 students for winning various sections of the competition. The St. Andrew-based Campion College won the top prize.

The competition, which is the highlight of the Schools Energy Program, which the PCJ carries out annually, is to promote energy education among Jamaica’s youth in primary and secondary schools. It allowed the students to participate in the Essay, Science and Poster sections of the competition.