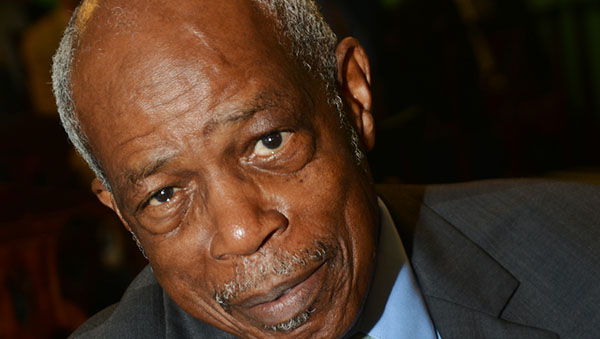 Harris said that Sir Kennedy, who became prime minister when the island attained its political independence from Britain in 1983, was also one of the signatories establishing the Organisation of Eastern Caribbean States (OECS) in 1981.

Harris said that as head of the government, Sir Kennedy, now 80, had overseen an administration that brought improved socio-economic conditions to the twin-island Federation during the period 1983-95.

“We cannot catalogue every achievement on the economic landscape and neither would we seek to enumerate those on the social landscape.

“Suffice it to note that it would be remiss of me to neglect Sir Kennedy’s impact on making our country’s education and banking systems more egalitarian, his administration’s efforts to end gender imbalance, support equality of children irrespective of the circumstances of birth,” Prime Minister Harris said of the island’s only living National Hero. 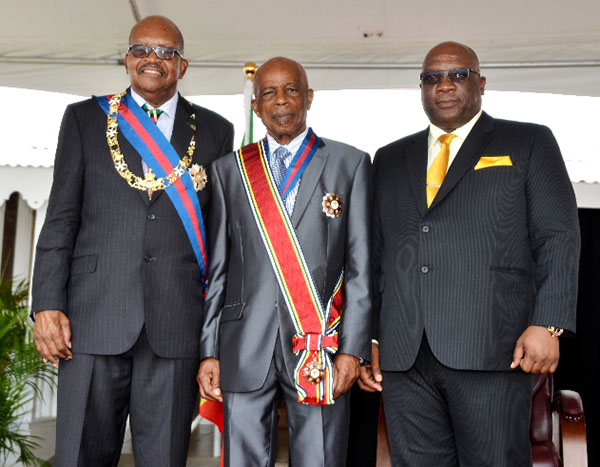 “Today we are honouring a man who has defined himself as an outstanding leader. He has made a significant difference to the people of St Kitts and Nevis as well as defining his reputation around the world,” he added.

But Prime Minister Harris said that his administration is of the view that there is need for more diversity in the pantheon of National Heroes.

“For instance, all of our country’s National Heroes were born in the first half of the 20th Century, and all have been active in politics and government. Notably, this year, Montserrat conferred, posthumously, the Order of National Hero on Alphonsus “Arrow” Cassell, best known as the Mighty King of Soca and for his song “Hot, Hot, Hot.”

“And I am sure that it has not gone unnoticed, especially among women, that all of our National Heroes are men. Jamaica, notably in 1982, conferred the Order of National Hero on a woman in the person of Nanny, the highly charismatic leader of the Maroons at the beginning of the 18th Century,” Harris said.

Prime Minister Harris said that he was now encouraging every Kittitian and Nevisian, particularly young people, to think, dream and act like a hero every day, in even the smallest ways.

“Think of every moment in your life as a pixel that plays a role in creating a high-resolution image of you for the entire world to see. If all of us were to look at that picture of you now, what details would you want us to focus on?

“Would we see someone who lets circumstances define them, or someone like Sir Kennedy, who overcame adverse socio-economic circumstances to reach the zenith of his career?

“Our nation needs heroes for the future. Young people who will see themselves as our future leaders and who can share their passion, integrity and dynamism to make a difference to their people, our people. The future of our nation relies on you, for our tomorrows and that of future generations,” he told the ceremony.