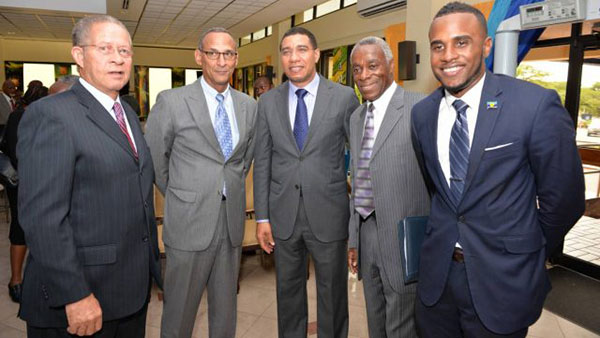 PM Says Jamaica Has No Intention Of Leaving CARICOM

“We cannot pre-empt what the Commission will say, but it was never the intention to lay any groundwork or chart any path out of CARICOM,” Holness said, at a ceremony launching the Bruce Golding-chaired Commission on Tuesday.

“This is about strengthening Jamaica’s position within the regional integration process, which is absolutely important for Jamaica’s economic growth and development for the next 50 years,” he said.

During the budget debate in May, Prime Minister Holness said that the Commission will also review the CARICOM arrangement in light of the wider Caribbean, inclusive of the Dominican Republic and Cuba as well as the impact of globalization.

It will also assess the value of Jamaica’s membership within the organisation and its influence in critical international fora and assess the benefits derived through function cooperation within the CARICOM framework.

Golding, a former prime minister, said that one of the areas of concern was the extent to which the Revised Treaty of Chaguaramas is able to respond to changes that have taken place over the years.

He said the Commission would also have to consider the extent to which there are differences between the national goals of individual countries and that of CARICOM.

He has promised to move swiftly to address the successes and failures of CARICOM and how it has impacted development in Jamaica.

The commission will, among other things, evaluate the effects that Jamaica’s participation in CARICOM has on its economic growth and development; analyse CARICOM’s performance against the goals and objectives outlined in the revised Treaty of Chaguaramas and to identify the causes of the shortcomings; assess the value of Jamaica’s membership in CARICOM on its influence in critical international fora and with third state trade and development partners; and assess whether the CARICOM dispute settlement provisions provide realistic options for settlement of disputes for Jamaica.

Apart from Golding, the other members of the Commission will come from a wide cross-section, including the private sector, academia, business, finance and trade unions.

It is expected to submit its report within six months.