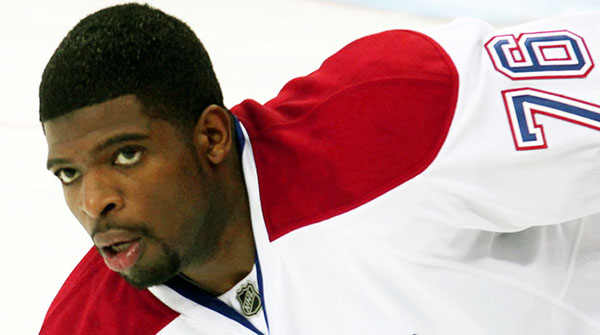 P.K. Subban’s Experience With The Habs: A Case Study In Human Rights Law?

The majority of observers and commentators analyzing the recent tenure of superstar hockey player, P.K. Subban, with the Montreal Canadiens, which culminated in him being traded to the Nashville Predators for Shea Webber, will insist that his race had nothing to do with it.

It is all a matter of fit they say. P.K.’s “larger-than-life” personality simply did not “fit” within the somber and “conservative” character traits which hockey’s most storied franchise “has come to expect of its stars”.

P.K. Subban, himself, has understandably never invoked his race into this discussion.

Accordingly, the objective and purpose of this post is not to point fingers or make spurious allegations, but instead to further public discourse and understanding on an issue of public importance — equality in the workplace.

Those of us, who make a living representing workers and other victims on racial and other forms of discrimination, have the benefit of seeing the P.K. Subban case in a manner which most observers are either unable, or unwilling, to see it.

In this post I wish to demonstrate how contrary to the conventional wisdom P.K. Subban’s race, arguably, played a role in the Montreal Canadien’s decision to part ways with its superstar defenceman, and serves as a reminder to us all, that we still have a way to go to achieve any semblance of equality in the workplace.

In order to appreciate and understand how P.K. Subban’s race was, indeed, a factor in the decision to trade him, one needs to be capable of appreciating and understanding the phenomenon of racism in Canada.

If one starts their analysis from the perspective that racism and racial discrimination does not exist in Canada then, from the outset, one’s ability to understand and comment, intelligently, on the matter is flawed.

Public policy in Canada has recognized that racial and other forms of discrimination are alive and well in Canada’s workplaces. The federal and all provincial legislatures in this country have all passed laws prohibiting discrimination in employment.

P.K. Subban’s entry into the NHL had all the hallmarks and trappings of superstardom. Called up from the Habs CHL affiliate during the 2009 playoffs, the young Subban was immediately compared to the likes of legendary players, like Bobby Orr and Larry Robinson.

P.K. himself never compared himself to any of the greats. P.K. simply played his game.

Steven Stamkos, John Tavares and P.K. Subban all grew up playing hockey in the Greater Toronto Area as children. Each of these young men come from families which are recent immigrants to Canada. Stamkos – Macedonian, Tavares – Polish and Portuguese. Subban – Jamaican and Monstratian.

They all made it to the NHL. They are all recognized superstars in the NHL. No one compares Steven Stamkos to Wayne Gretzky or Marc Mercier. Why ?

I submit it is because of a dynamic that I have come to see in my work as a human rights lawyer in this country, which I refer to as, The Fear Dynamic.

The Fear Dynamic is an intentional and often unintentional defence mechanism, which motivates the dominant group in a society, to establish unofficial structures and practices that have the effect of defining, unfairly objectifying and otherwise circumscribing the accomplishments of others in order to preserve the dominant group’s perceived superiority over others.

The operation of this phenomenon is not restricted to race. In my work as a human rights lawyer I see this same phenomenon operate to keep women out of leadership roles in the workplace.

NHL analyst, Darren Pang, while comparing P.K. Subban to Alex Petrangelo, another gifted defenseman of European descent, inadvertently hit the nail on the head, in trying to explain why P.K. Subban seemed to always raise the ire of hockey observers and pundits.

He said Pietrangelo “does everything, on the ice , off the ice the white way.”

The Greatest – Mohamed Ali – reminded us, years ago, why America’s white establishment had such a strong distaste for him. Ali said he would not allow them to dictate to him who he was and how he should be.

Reading between the lines, this dynamic seems to have been operative during P.K.’s tenure in Montreal. In commenting on P.K. recently, Hall of Famer, Guy Lafleur, suggested that P.K. was “too loud” and that “somebody would have hit him with a stick” in his day.

Subban is a deviation from the norm. Subban is in a place where people who look like him are simply not expected to perform at the level at which he does.

Subban and his performance causes discomfort or, to borrow a phrase from social psychology, “cognitive dissonance” to many in the Canadian public and, it would arguably appear to some, in the Hab’s management.

In order to alleviate the discomfort caused between the expectations from players like Subban – an African-Canadian and his superstar-calibre performance – an adjustment of the reality must take place. The narrative must change to P.K. Subban may be a superstar BUT he has character flaws which make him unfit and undesirable to the goals of our team.

Anyone who knows anything about racism, anti-semitism, etc. and discrimination is well aware that these phenomena rear their ugly head during times of economic crisis and, in the sports world, team failure.

The Habs failed dismally last season. Ordinarily, the general manager and or coach answers with his or her job for team failure. Michel Therrien, for his part, was given an assurance of job security before the season ended.

Those familiar with the Habs will tell you, honestly, that left to Montreal Canadiens’ management, Subban would have been traded last year.

Instead, Jeff Molson had to step in and extend a contract, commensurate with superstar status to Subban. Reports suggest that this contract made Subban the highest paid defenceman in the NHL and the third highest paid player in the league overall.

In a society which is still struggling to bring its officially stated policies of multiculturalism, bilingualism and tolerance into a coherent and workable framework to bring equality in the workplace to all Canadians, Subban’s experience with hockey’s fabled franchise is a classic case study to underscore just how far we have to go on this score.

I submit that we laughed because comedy is often the unconscious vehicle through which we unconsciously acknowledge both our strengths and failings as a society.

With the exception of Carey Price, P.K.’s junior and professional accomplishments and statistics exceeds everyone on his team;

P.K. – unlike his contemporaries – Stamkos and Travers – was overlooked to be captain of his team;

But for the intervention of Jeff Molson, Habs’ management, led by Mr. Bergevein, were content to part ways with Subban last year;

Jeff Molson stepped-in and publicly acknowledged P.K.’s worth to his business interests;

Subban was awarded the Jean Beliveau trophy in 2015-16 for his contributions in the community;

The Montreal Canadiens failed to make the playoffs this season and had one of their worst seasons in recent memory;

Leaked media reports suggested that Mr. Bergevin was speaking to other teams about P.K;

Mr. Bergevin stated it was a “difficult” decision to part ways with P.K. and elected before the end of the season to support “his coach” Michel Therrien who many observers felt had a strong animus against P.K. for some time now.

P.K. would not be required to establish that racial discrimination was the only factor in his case. All he would have to establish is that it was a factor. On all of the facts, as I know them, I think that could be easily established.

Since cases are decided on evidence and findings of fact, it is understood this entire exercise is limited to the facts which the writer and the public have been privy to.

Ernest Guiste is a trial and appeal lawyer, who represents clients in administrative law, criminal, employment, human rights and personal injury and insurance.