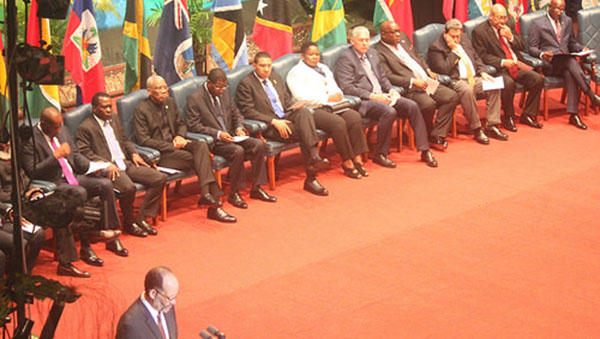 GEORGETOWN, Guyana, July 5, (CMC) – Caribbean Community (CARICOM) leaders will be “taking a look at the thorny issues” confronting the full implementation of the CARICOM Single Market and Economy (CSME) during their three-day summit here, which opened on Monday night.

Barbados Prime Minister, Freundel Stuart, who has lead responsibility for the CSME within the quasi-CARICOM Cabinet, told the Caribbean Media Corporation (CMC) that while he was not in a position to outline the recommendations going before the leaders at this time, he was certain that the initiative had been very beneficial so far to the Caribbean population.

Trinidad and Tobago’s Prime Minister, Dr. Keith Rowley, has already indicated that Port of Spain would be placing on the regional agenda, the issue of the CSME that is observing its 10th anniversary.

The CSME allows for the free movement of goods, skills, labour and services across the region, but it has been dogged by various problems, including allegations by some regional countries that their nationals are not being allowed to freely enter member states.

Stuart told CMC that the speech delivered by his St. Vincent and the Grenadines counterpart, Dr. Ralph Gonsavles, in which he was critical of people who felt that CARICOM had been a failure, was “very interesting in that regard, because as I said in Barbados last year (CARICOM summit), we have a way of tending to accentuate what has not happened and a way of losing sight of, in fact, what has happened.

“I do not think that the situation is as grave as I heard described, I think the focus is on what has not yet happened.

“Let us be very frank about it, over the last seven to eight years, our region has been under pressure from events taking place in the international environment. Most of our member states have had to be inward-looking with a view to ensuring that they deal with the hot immediacies of everyday governance”. 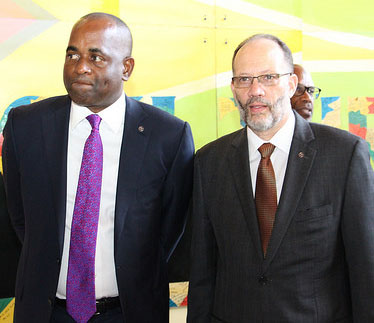 But he told CMC that at this summit here, “we are going to be having a look at what are the thorny issues that need to be resolved, what are the mountains we need to climb to bring to full, or near full, realisation of the Caribbean Single Market and Economy”.

CARICOM Chairman, Roosevelt Skerrit, speaking at the ceremonial opening of the summit here, on Monday night, said “I cannot understand why we have not completed the essential infrastructure to facilitate movement towards an effective free trade area, a meaningful community or a Single Market and Economy”.

He questioned why the initiative has so far failed to gain the necessary traction needed, saying “there is no doubt whatsoever, that the essential infrastructure to facilitate economic cooperation and growth in CARICOM is incomplete.

“Let us not ignore the fact that we have made some progress,” he said, noting for example, we have seen movement in the fourth priority, which is a productive regionally integrated labour market, including a long range view of the skills needed, their movement and how work is done”.

But Skerrit sought to underscore the need for greater cooperation among Caribbean countries noting that “it takes two hands to clap.

“CARICOM is not about imposing policies and programs on member states. It is about empowering member states by democratic means. A major responsibility therefore falls at the level of Member States to get things moving.

“For example, we have agreed on any number of measures to advance the CARICOM Single Market and Economy and our officials have completed all the necessary technical work.

“However, due to the failure of our member states to give the go ahead, those critical measures remain unattended. There are several other cases which can be listed as demonstrating that there can be movement in other areas of the CSME. Their completion could enhance our competitiveness and create considerable opportunities for our community,” he stated.