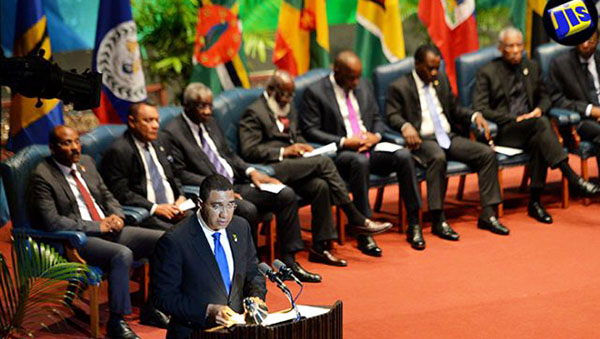 Addressing the ceremonial opening of the 37th summit of Caribbean leaders, Monday night, Holness said that he had observed that the regional countries have not paid much attention to strengthening their bilateral relationships within the 15-member grouping.

“We believe that bilateral consultations, supported by additional effort in the institutions of our community, can make the movement of labour equal with the movement of goods, extending the progress and benefit of the integration effort.

“In this regard, we are pleased to be negotiating a joint commission agreement with Trinidad and Tobago, through which we hope to develop a mutually-beneficial cooperation program. We intend to undertake similar initiatives with other member states,” Holness said.

In recent months, the relationship between the two CARIOM countries have been hit by allegations that Port of Spain had embarked upon a policy of deliberately deporting Jamaicans, resulting in some sections of the private sector in Kingston calling for a boycott of goods and services from its oil-rich Caribbean neighbour.

“Jamaicans have been expressing concerns about increased cases of denial of entry to other jurisdictions and questions their treatment at ports-of-entry. These must be urgently addressed in a meaningful way, otherwise the economic sense of CARICOM is increasingly questioned,” Holness noted.

Trinidad and Tobago Prime Minister, Dr. Keith Rowley, is due to pay an official three-day visit to Jamaica on July 17.

He said that regional integration is a not an end in itself; it is a means to achieve a much broader objective, the economic growth and development of the region and the improvement of the lives of its people.

“It should allow small economies, like ours, to overcome regional constraints, build our resilience and take advantage of new and existing opportunities in the global market.

“Jamaica has been supportive of the CSME from its inception. We have undertaken the necessary reforms, including changes to our legislation, in fulfillment of our obligations under this regional undertaking.

“Jamaica now provides a strong, transparent and predictable regulatory environment for those who wish to relocate there, for work purposes. This is indeed an important pillar of the regional integration process. For many, including the man in the street, free movement represents a tangible way in which he can benefit from regional integration,” Holness added.

Rowley has already signalled that Port-of-Spain intends to have the issue of the CSME brought back on the regional agenda, and CARICOM Chairman, Roosevelt Skerrit, said “I cannot understand why we have not completed the essential infrastructure to facilitate movement towards an effective free trade area, a meaningful community or a single market and economy”.

He questioned why the initiative has, so far, failed to gain the necessary traction needed, saying “there is no doubt whatsoever, that the essential infrastructure to facilitate economic cooperation and growth in CARICOM is incomplete”.

“Let us not ignore the fact that we have made some progress,” he said, noting for example, “we have seen movement in the fourth priority, which is a productive regionally integrated labour market, including a long range view of the skills needed for their movement and how work is done”.

But Skerrit sought to underscore the need for greater cooperation among Caribbean countries noting that “it takes two hands to clap.

“CARICOM is not about imposing policies and programs on member states. It is about empowering member states by democratic means. A major responsibility therefore falls at the level of Member States to get things moving.

“For example, we have agreed on any number of measures to advance the CARICOM Single Market and Economy and our officials have completed all the necessary technical work.

“However, due to the failure of our member states to give the go ahead, those critical measures remain unattended. There are several other cases which can be listed as demonstrating that there can be movement in other areas of the CSME. Their completion could enhance our competitiveness and create considerable opportunities for our Community.”

He listed among them, the establishment of a Labour Market Information System, a Single Information and Communications Technology (ICT) space, a Regional Legal Framework of Cooperation to Combat Crime and Enhance Security and legislation to help control Non-Communicable Diseases (NCDs).

“In all these cases our officials have completed the roadmaps towards achieving the various objectives. However, despite valiant attempts, we have not yet been able to bring together the Ministers responsible for these areas to consider the roadmaps and approve them.

“We definitely need action by member states to complete this process of change” he added.