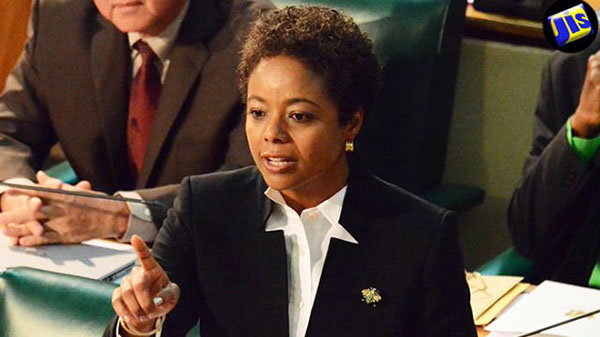 Jamaica's Attorney-General, Marlene Malahoo Forte, makes her presentation in the 2016/17 Sectoral Debate in the House of Representatives on July 6. Photo credit: Rudranath Fraser/JIS.

Malahoo Forte, in her contribution to the 2016/2017 Sectoral debate in Parliament, said discussions have already started with the private and public bar and the Chief Justice.

“To successfully tackle the murder problem, some of the fundamental rights and freedoms, which we have guaranteed to our people, may have to be abrogated, abridged or infringed, because the evidence we are examining, convince us that such action may be demonstrably justified in this free and democratic society,” she noted.

“While judicial discretion must be preserved and respected, Parliament, in the exercise of its powers to pass laws for peace, order and good government, will have to set the threshold for the consequences that will flow, when people choose to murder and cause mayhem,” she added.

According to Malahoo Forte, crime, particularly murder, has been a binding constraint on the country’s growth rate.

However, her announcement has not gone down well with the opposition People’s National Party’s (PNP) spokesman on Justice, Mark Golding, who argues that as Attorney-General, Malahoo Forte should be advising the government on the constitutionality of laws and not be pushing a government policy position

“We have a Minster of Justice, we have a Minister of National Security, and it’s their role to deal with issues of policy around national security issues and justice issues. I don’t think it’s appropriate that the Attorney-General should be putting forward policy positions, which are draconian and which would tend to restrict the rights of the Jamaica people in dealing with the state,” he said.

Golding says the Attorney-General has misunderstood her role and a review is needed.

But in response, Malahoo Forte said the Prime Minister asked her to deal with these issues.

“Are you saying that the Prime Minister can’t do so? I understand why the question is being asked – why is it the Attorney-General and why not the Minister of Justice and why hasn’t he (the Justice Minister) done it? I indicated in the presentation that collaboration is taking place between the Minister of Justice and my office, and I have been instructed to deal with the matter. So persons are taking issue with that instruction to deal with proposed legislative measures?

Meanwhile former senior Deputy Director of Public Prosecutions, Caroline Hay, says the position of the Attorney-General could cause problems.

She said while the proposals are well intentioned, they appear to be in conflict with the constitution.