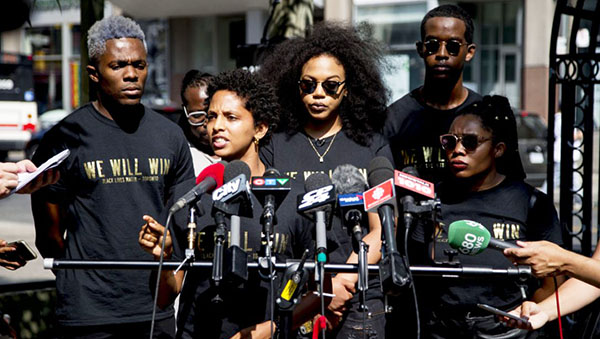 TORONTO, Ontario, July 11, (PRIDE) — Black Lives Matter – Toronto remains resolute in its nine demands to Pride Toronto, organizer of the annual Pride festival, which were presented by the group, during a sit-in protest at the Pride Parade on July 3 – where it was the honoured group leading the parade.

Although he signed the demands, Pride Toronto’s Executive Director, Mathieu Chantelois, told the Toronto Star, the next day, that he would not move forward on them without consulting his community.

He said that he only signed the demands to get the parade moving.

Rodney Diverlus, a co-founder of Black Lives Matter – Toronto, says since the protest on July 3, there has been a general silence from Pride Toronto on this issue.

As a result, the group will be working with Blackness Yes! and BQY and will hold a community meeting, in the next couple weeks, to have a conversation around what “our options are as a community, for people to air their frustrations, for people to talk about how do we make sure that all these demands get followed up.”

Since its action, Black Lives Matter – Toronto has been flooded with hate mail and much of the attention of the media has focused on one of the demands – #8: “Removal of police floats/booths in all Pride marches/parades/community spaces.”

Hate mail was also sent to the Blackpages Canada Directory website, a former publication of the Jamaican Weekly Gleaner, here in Toronto.

Someone with the email address, jackson@dell.com, wrote: “niggers shouldn’t block the pride parade, you are a bunch of dumbass apes for doing that.”

Reacting to the backlash, Diverlus says it is always a shock when one sees the media, the public and politicians not actually listening to the Black community’s needs.

“But I also think that this is consistent with the ways that our messaging has been taken out of context and thwarted in the media and the public,” he elaborated.

He said a press conference, held by the group on July 7, across from Wellesley subway station — location of the popular Blockorama event during Pride – was to reiterate the fact that there were nine demands that were made of Pride Toronto.

“These nine were met and were signed and agreed upon and then, 24 hours later, were recanted, so I think, for us, it’s also important to reiterate to the public and to the media that we’re not interested in this back and forth and this political game of buzz words and he said and she said and they said,” he explained.

Diverlus said the organization is interested in substance for the Black LGBTQ community.

“We’re interested in talking about real, concrete issues and the fact that the media hasn’t even taken an interest in asking about BQY [Black Queer Youth] and Blackness Yes!, the fact that they took no interest in having a conversation about why do we want a police-free Pride. What about Sumaya Dalmar [a Somali Canadian trans woman killed in 2015] and other Black trans women, whose lives have been lost and who don’t feel safe around policing? There are a number of things that are missing from the analysis and, four days later, we’re still stuck on having a conversation about whether or not this decision was made under duress, and us hijacking the parade, etc.,” he added.

Blackness Yes!, a community-based committee that works year-round to celebrate Black queer and trans history, creativity and resistance, has organized Blockorama for 18 years.

It is an initiative of Supporting Our Youth, a program of the Sherbourne Health Centre in Toronto.

Speaking about Mayor John Tory’s response to their action, in his writing of a letter to the Toronto Police Association supporting the participation of police in Pride, Diverlus said Tory is politicking.

“He is using this as a convenient way to gain political points and we’re asking him to stay in his lane,” said Diverlus.

“We want to make it very clear to the mayor that we’re not interested in politicking and, when he’s ready to have real and honest conversations about anti-Black racism, we’ll be more than happy to participate with him, but we won’t be participating in this media game with him.”

Diverlus said out of all the actions Black Lives Matter – Toronto has done, it has never seen such a large sum of hate mails as now.

It has received hundreds, and its members are avoiding the gay village, says Diverlus, who thinks that this says a lot about the racism within the LGBTQ community.

“I think that this says a lot about the state of anti-Blackness. It’s difficult and it’s hurtful, but it’s also motivating at the same time,” he said. 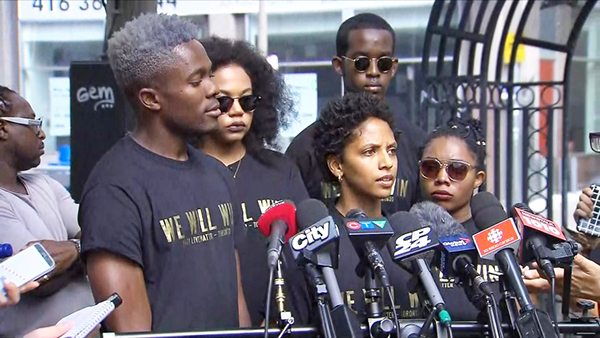 Black Lives Matter-Toronto is the Toronto chapter of the #‎BlackLivesMatter network, an international organization and movement fighting anti-Black racism and state-sanctioned violence.

Despite the public backlash, the group has won the support of many Black LGBTQ leaders and allies, who note that Pride was founded as a result of protest.

In light of the controversy surrounding the sit-in protest, CBC News invited Black LGBT scholars and activists to share their thoughts on the matter.

They wrote collectively that: “Toronto’s Pride march grew out of our community’s resistance to massive police raids of bathhouses in 1981. Two of Pride’s original organizers — Gays and Lesbians Against the Right Everywhere (GLARE) and Lesbians Against the Right (LAR) — were liberation groups, dedicated to fighting the anti-gay, anti-feminist and racist right-wing politics of the day,” published in “Point of View” at www.cbc.ca on July 6.

They noted that Black Lives Matter – Toronto is “continuing a practice of intervention and resistance, firmly rooted in a tradition of protest.”

The scholars and activists said the demands of the organization have a long history within Pride, and that the agreements it secured on July 3, should not be diminished.

“In the tradition of Black radical politics, they did not just make their demands about Black people, but instead modelled what queer inclusion really means, by also requesting employment and community spaces for South Asian, indigenous, trans and people living with disabilities. We are thankful they reminded us of our past, while making important demands of the present.

“We were, for the first time in many years, proud to be queer at the gay parade,” wrote the signatories that included Rinaldo Walcott, Director of Women and Gender Studies Institute at the University of Toronto; Angela Robertson, Executive Director of Queen West Central Toronto Community Health Centre, and a founding member of Blackness Yes!, which produces the Blockorama stage at Pride; and Beverly Bain, a teacher in the Woman and Gender Studies Program at the University of Toronto.

There are also Akua Benjamin, activist, professor at Ryerson University School of Social Work, and co-founder of the Anti-Black Racism Network; Debbie Douglas, Executive Director of the Ontario Council of Agencies Serving Immigrants (OCASI), and a founding member of several local LGBT groups; Dionne A. Falconer, founding member of Blackness Yes!, HIV/AIDS activist; and Beth Jordan, activist, co-founder of the Cross Sectoral Violence Against Women Strategy Group, and former co-chair of the Community One Foundation.

On June 29, four days before the Pride Parade, Rinaldo Walcott and Rodney Diverlus, were among five panelists at a human rights discussion entitled “Blackness and Queer Politics,” moderated by Beth Jordan at the 519 Church Street Community Centre.

Diverlus articulated some of the issues which eventually informed the nine demands of the group on July 3 at the sit-in protest.

He spoke about the importance of space for Black and queer LGBTQ people at Pride and of the heckling Black Lives Matter – Toronto received from members of the white LGBTQ community, who were gathered at the unveiling of a mural, where the group was protesting what it describes as a transphobic depiction of trans people.

Walcott spoke of his support for Black Lives Matter – Toronto and “insisted that we think through the strategies of Black feminisms of the 70s and 80s when we think of the anti-Black racism and queer and trans political work of today and tomorrow,” notes Dryden, Bain and Walcott in an Open Letter written about the panel discussion a few days later.

Caribbean Headline News, hosted by Paulton Mckenzie, and broadcast on Rogers TV (Channel 10 or 63) will feature an excerpt of the discussion and panelists on July 16 at noon, and on July 20 at 6:30p.m.

Two of the original organizers of Pride – Gary Kinsman and Amy Gottlieb – also wrote in the CBC “Point of View” on July 6 in support of the action taken by Black Lives Matter – Toronto.

Kinsman, an organizer with the Lesbian and Gay Pride Day Committee in 1981, wrote: “The Black Lives Matter contingent carried with it the spirit of Stonewall and the activist roots of Pride — not Pride as it is now, defined by corporations, by mainstream political parties, by the police. Pride is our biggest gathering, our greatest opportunity to stand against aggression.”

Gottlieb, a white, queer ally; a member of Lesbians Against the Right and an organizer of Lesbian and Gay Pride Day and the Dykes in the Street March in 1981, wrote: “It took 35 years for Black Lives Matter Toronto’s beautiful, bold intervention in Pride to put the issue of anti-Black racism and exclusion of other marginalized communities front and centre.”

Gottlieb said, “Pride has been confronted with the issues of racism and police violence before, but not like this.”

“Black Lives Matter Toronto’s actions are a challenge to systemic injustices. They are demanding that we sit down with them and listen — listen to how our movements and spaces are organized through a white, middle class lens. Black Lives Matter Toronto brings us back to the historic roots of our movement and to the true definition of resistance to all injustices,” she concluded.

In 1992 the L.A. riots, as a result of the acquittal of police officers caught by video beating African American, Rodney King, triggered the Yonge Street riots here in Toronto.

In its aftermath, then premier Bob Rae, asked Stephen Lewis to take on the role of advisor on race relations.

An abstract of the “Stephen Lewis Report on Race Relations in Ontario June 1992” identified the widespread presence of anti-Black racism in the province.

“Four key observations are noted: 1) anti-Black racism is the most prevalent form of racism; 2) reporting mechanisms are thought to be frustrating, redundant and useless by the minorities; 3) fear is pervasive in the Black community; 4) there is a clear need for speedy action. The recommendations made, touch upon a number of themes including: the criminal justice system itself (referring to the Police Task Force, the police complaints and investigative procedure; police training and the use of force), employment equity, education, the Ontario Anti-Racism Secretariat, the Cabinet Committee on Race Relations and community development,” notes the abstract.

In 1994, the African Canadian Legal Clinic (ACLC), a not-for-profit organization, was established expressly to address anti-Black racism in Canadian society.

Meanwhile, the province’s first meeting in a series of community meetings across Ontario, to engage with the public and organizations on addressing systemic racism and eliminating barriers for Indigenous and racialized communities will be held this week – July 14 – at Daniels Spectrum in Toronto.

Michael Coteau, Minister Responsible for Anti-Racism, will host nine public community meetings to hear from Ontarians about how to address systemic racism and implement meaningful change.

A press release said the community meetings will help further public dialogue, receive input on the Anti-Racism Directorate’s mandate, and identify priority areas for the Directorate as it applies an anti-racism perspective to government policies, programs and services.

Meetings will also take place in Scarborough on September 13, Mississauga on September 27, as well as in Ottawa, Sudbury, London, Windsor, Thunder Bay, and another in the Greater Toronto Area.

The Anti-Racism Directorate was established in February of this year to increase public education and awareness of racism and apply an anti-racism perspective in developing, implementing and evaluating government policies, programs and services.