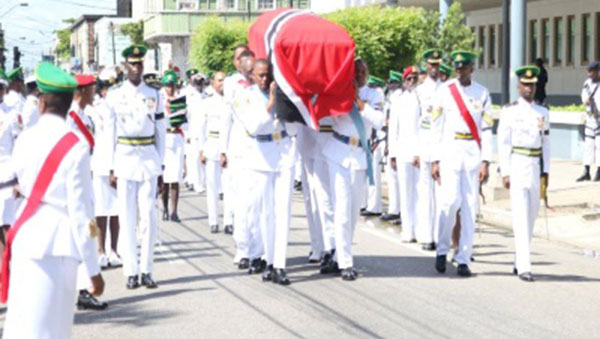 Members of the Trinidad and Tobago Regiment carry the flag-draped coffin with the body of the twin-island nation's former prime minister, Patrick Manning.

PORT OF SPAIN, Trinidad and Tobago, July 11, (CMC) – Last Saturday, Trinidad and Tobago bade farewell to Patrick Augustus Mervyn Manning, who served as prime minister on two occasions and remembered as a person who sought, not only the social and economic development of his own country, but of the entire Caribbean.

Manning, 69, who died less than 24 hours after he had been diagnosed with acute myeloid leukemia on July 2, was a member of parliament until September 2015, making him the longest serving legislator here.

His son, Brian Manning, in his eulogy, called for the establishment of a regional fund to provide housing for low income people throughout the Caribbean Community (CARICOM), the Dominican Republic and Haiti.

He said it should be called the “Patrick Manning Development Fund” and housed at the International Financial Centre here. 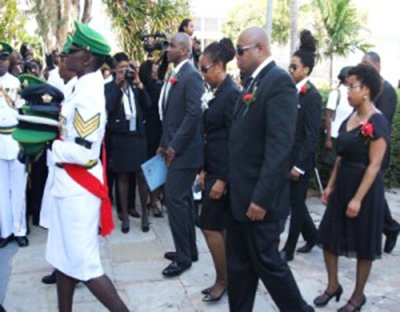 Mrs Hazel Manning, flanked by her two sons, Brian and David, as they enter the church.

The younger Manning also called for the re-establishment of the Divine Echoes Orchestra that was disbanded by the People’s Partnership government soon after it replaced the Manning administration in 2010.

He told the mourners that his father truly believed that music was an avenue to help young people channel their energy, lift lives and spirits.

Manning said that his father, who served as prime minister on two occasions during the period 1991 to 2010, touched many lives and “lived a life of love and service” and was not an accumulator of wealth.

“He was a father to many and touched many lives. He always led by example,” Manning said, adding that the policies of his father’s administrations were aimed at alleviating poverty, improving education and providing housing to all people.

Among the regional and international dignitaries attending the three-hour 15-minute church service were the President of Dominica, Charles Savarin; the prime ministers of St. Lucia, St. Kitts-Nevis and Grenada; and former Bahamian prime minister, Hubert Ingraham.

“He was no regional armchair regionalist,” Trinidad and Tobago President, Anthony Carmona, said at the state funeral, officiated by Bishop Claude Berkley, at the packed Holy Trinity Church in the heart of the capital.

Tents were erected at nearby Woodford Square to accommodate thousands of people who turned up for the service, reminiscent of the environment in which Manning would campaign for political office.

“He was bold enough to champion the causes for regional integration wherever he went,” Carmona said, urging that Manning’s work should be documented for future generations of policy makers among others.

He added that there was a “grounded consensus” since his death that Patrick Manning led the charge for the development, not only of Trinidad and Tobago, but also the entire region and his, was therefore, a “formidable legacy”.

In his statement, St. Vincent and the Grenadines Prime Minister, Dr. Ralph Gonsalves, recalled that his friendship with Manning dated back to their years at the Mona campus of the University of the West Indies (UWI) in Jamaica in the 1960’s. 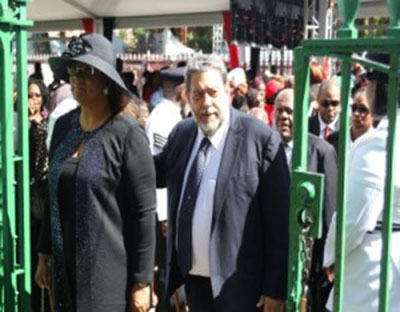 Gonsalves described his former university friend as “a human being of the highest quality”, who will always remain “in the hearts and minds of every Trinidad and Tobago and Caribbean national.

“That is more important than any monument in his name,” Gonsalves said, adding that the former prime minister was “possessed of a spirit of generosity.”

Gonsalves, said that Manning would have celebrated his 70th birthday next month, and that they “were tight political buddies,” who spoke almost daily and collaborated on a number of initiatives.

CARICOM Secretary-General, Irwin LaRocque, said that the region has “lost a truly remarkable person and statesman”, reminding the congregation that regional leaders at their summit , which ended in Guyana, last week, adopted a resolution paying respect to Manning for his “unselfish support” to the region.

He described Manning as “one of our fairest sons” and who made public service a hallmark of his more than 40 years in service to the people of Trinidad and Tobago and the Caribbean. 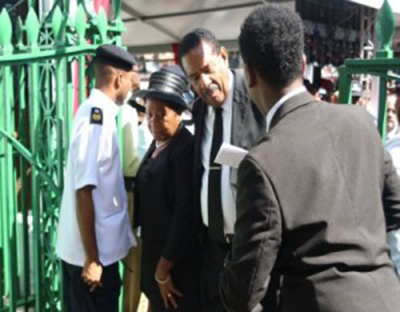 A geologist by training, he became the leader of the now ruling People’s National Movement (PNM) from 1987 until he lost the general election in 2010. He served as Member of Parliament for the San Fernando East constituency from 1971 until 2015, when he decided against contesting the general election.

Manning was one of three PNM legislators who survived the 33-3 routing that the PNM received at the hands of the National Alliance for Reconstruction (NAR), an amalgam of political parties that defeated the PNM after 30 years of unbroken rule in 1986.

He will also be remembered for calling two general elections ahead of the constitutional deadline, including the 2010 poll that brought the People’s Partnership government to office.

Following the State funeral, the body of the former prime minister was taken to a chapel of a funeral home for a private service for members of his family.

Manning is survived by his wife, Hazel, a former education minister, and two sons, Brian and David.