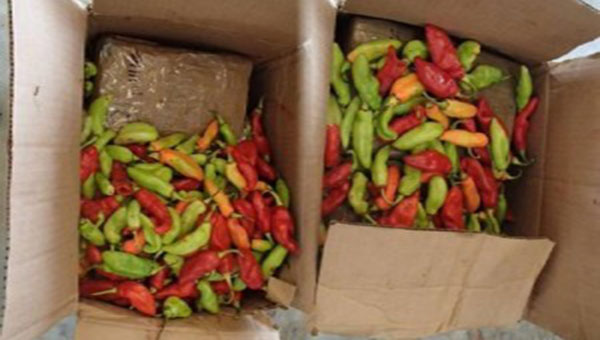 19 kilograms of cocaine, were found, hidden under these hot peppers, in a cargo plane, coming from Trinidad and Tobago. Photo courtesy of Canadian Border Services Agency.

The Canada Border Services Agency (CBSA), in a statement, said the discovery happened on Thursday, June 23, when officers searched a plane arriving from Port of Spain.

It said that while the plane was being unloaded, officers noticed two suspicious boxes and, on further investigation, found a bushel of hot peppers containing 17 brick-shaped packages hidden underneath.

The CBSA said while the officers continued searching the plane, the product was sent for examination and tested positive for suspected cocaine. The drugs were handed over to the Royal Canadian Mounted Police (RCMP) for follow up, and the CBSA gave no further details on the discovery.