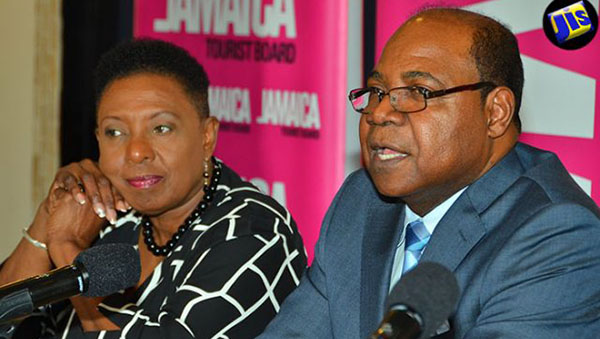 Jamaica’s Tourism Product To Be Highlighted At Rio Olympics

NEW KINGSTON, Jamaica, July 14 (JIS) — Brand Jamaica is expected to be further bolstered through an ongoing initiative to promote the country’s tourism product, during the staging of the 2016 Summer Olympics in Rio de Janeiro, Brazil.

This will be done through ‘Jamaica House Rio’, a hospitality hub, to be set up at Prado Jockey Club near the Olympic Stadium, where patrons from around the world will get the opportunity to watch the country’s athletes perform while enjoying authentic Jamaican hospitality.

Speaking at the launch of the event at The Jamaica Pegasus hotel, yesterday, Bartlett said the initiative will provide a major opportunity to “drive more visitor arrivals, to drive greater revenue, and to create more jobs”.

The Minister said the government recognises that the South American market, of which Brazil is a major part, “is the new frontier” in marketing opportunities for Jamaica. He noted that the time will, therefore, be used to also meet with tour operators and travel media, as well as air travel partners to boost visitor arrivals to the island.

“We will be using the opportunity there to leverage the presence of Jamaica at the Olympics to drive our marketing arrangements” he said.

He thanked all the partners and sponsors for putting the event together, “that will provide a new dimension to the appreciation of Jamaica, both as a destination of choice for tourists but also as the epicentre of global athletics.”

Minister of Culture, Gender, Entertainment and Sport, Olivia Grange, who was also in attendance, endorsed the Jamaica Tourist Board’s initiative.

Now in its fifth staging, Jamaica House is an integrated marketing concept, involving a public-private partnership with multiple agencies of government and private Jamaican corporations.

The primary objective of Jamaica House is to infuse the Olympic setting with Jamaican culture and destination Jamaica, promoting the brand and driving people to visit and invest in Jamaica.

Jamaica House, which will be held from August 10 to 21, will also facilitate networking opportunities for local tourism partners and stakeholders with leaders in the international marketplace.