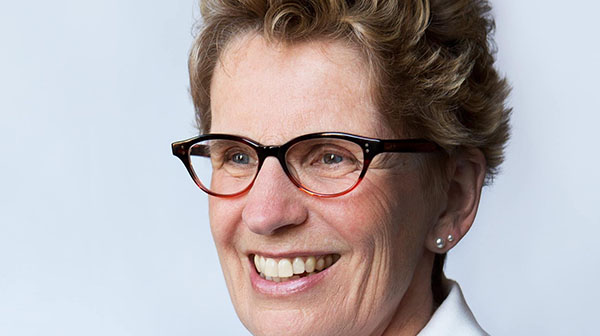 TORONTO, Ontario July 18, 2016 (PRIDE) — Ontario Premier Kathleen Wynne was greeted with a full house at the first of the province’s public, community meetings on anti-racism.

The event took place, last Thursday, July 14, at the Daniels Spectrum, located at 585 Dundas Street, in the heart of Toronto’s Regent Park community.

The purpose of the meetings is to seek community input on a new Anti-Racism Directorate, a new portfolio, directed by the Wynne government. MPP Michael Coteau, Minister of Children and Youth Services, is also the Minister responsible for anti-racism and is assigned to this portfolio.

The audience, which was made up of both community and labour members, was somewhat of a reflection of the cultural diversity that the greater Toronto area is known for.

Minister Coteau also addressed the participants and, when asked what the yearly budget for the new Anti-Racism Directorate was, replied that the budget is $5,000,000 and it has 32 full time staff.

The participants instantly roared in anger and disappointment, stating that the amount is not enough to do this file justice, and that it doesn’t appear that the province is serious about tackling anti-Black racism, and racism in general.

The Public Community Meetings on Anti-Racism are a direct result of the protests and the tent city occupation of the Metro Toronto Police Headquarters, led by Black Lives Matter Toronto chapter (BLMTO) in March of 2016.

The occupation was in protest of the police killing and later exonerations in the deaths of Andrew Loku and Jermaine Anthony Carby.

As a result of the protests and occupation, the province agreed to hold a series of meetings with communities in several cities. It was reported that the communities were to include Jane and Finch, Region Park, Scarborough and others.

It was further reported that the emphasis of the meetings were to include Anti-Black racism.

Akua Benjamin is an original member of Toronto’s Black Action Defence Committee (BADC) and was the first speaker at the microphone at last Thursday’s meeting.

She expressed admiration to Black Lives Matter Toronto for fighting for a public meeting to address racism.

“There hasn’t been a time in the last 50 years, when we have not marched on the streets of Toronto, calling out to put an end to racism,” said Benjamin.

She was soon followed by a young lady named Paigelina Pea Gee. Gee is a Franco Ontarian, who started her comments in French then English.

Being small in stature and harmless in appearance, once she began speaking, the elected officials in the room appeared to let their political guards down.

Once her French comments were completed, she humbly turned her attention towards Toronto Mayor, John Tory and, with the precision of a Green Berets soldier and while maintaining the elegance of a Princess, she proceeded to rip the political head off of Mayor Tory’s shoulders.

“I am a little shocked to see John Tory here. I don’t see you actually. It’s really interesting because I was out in tent city with a lot of people there, even babies, and I am wondering why you are piggy-backing on Kathleen Wynne’s meeting. We have been asking for a meeting for so long,” she said.

The cheering in the room was comparable to cheering at a sporting event at the Air Canada Center. (She was referring to the Mayor being visibly absent during the tent city occupation of the Metro Toronto Police Headquarters mentioned above).

Gee then referred to BLMTO’s 24-minute sit in at the recent Toronto Pride Parade and went on to say, “You came out to Pride Toronto’s rally and you were so hot to talk to the media about how Black Lives Matter Toronto acted, and yet you are here and you can’t even address us. What’s going on? You are a coward! You are a coward!”

By this time, many in the audience were standing on their feet and cheering like their team had just won the World Series.

Mayor Tory appeared visibly shaken and frazzled, in a manner which resembled how boxer, Iron Mike Tyson looked, after the historic beating he received from the former heavy weight champion, Lenox Lewis.

A battered-looking Mayor Tory staggered to his feet and said, “First of all I am here tonight because I was invited by the Ontario government and I felt it was proper that I should come, and I am glad I did. Secondly, we have agreed that there will be three series of meetings. This series put on by the Province. In August there are going to be consultation meetings on the police reform report that was put out last month and our meetings will be held in September and that has been communicated in writing by email to a number of organizations, including Black Lives Matter.”

At that point Mayor Tory returned to his seat.

According to the Anti-Racism Directorate’s website, future meetings will take place in Scarborough on September 13, Mississauga on September 27, as well as in Ottawa, Sudbury, London, Windsor, Thunder Bay, and another in the Greater Toronto Area. Dates and times for these meetings will be announced at a later date and posted on www.ontario.ca/antiracism.

Mark Brown is the Chair of the Toronto and York Region Labour Council’s Equity Committee, a member of the Coalition of Black Trade Unionist (CBTU), An Executive Board Member of the Labour Education Center and a member of the Toronto Local of the Canadian Union of Postal Workers. He can be contacted at: www.facebook.com/profile.php?id=100000658149978 or Twitter MarkAAABrown.