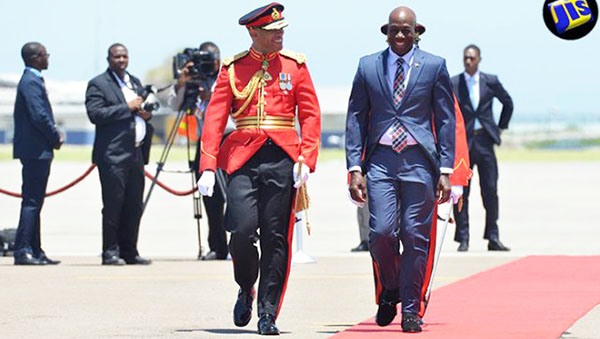 Prime Minister of the Republic of Trinidad and Tobago, Dr. Keith Rowley (right) is being escorted by Chief of Defence Staff, Major General Antony Anderson to inspect the Guard of Honour, formed by members of the Jamaica Defence Force, upon his arrival at the Norman Manley International Airport in Kingston on Sunday, July 17 for a four-day official visit. Photo: Mark Bell/JIS.

“We had a very good meeting and I am pleased to report that we made significant progress. There are issues, of course, that we will still have to discuss…but, in general, Prime Minister Rowley and myself have developed a very good friendship and understanding,” Holness told reporters at a brief, joint news conference.

Rowley, who was accompanied by his wife, Mrs. Sharon Rowley, and who is leading a six-member delegation to the talks here, said he wanted to “endorse” what Holness said about the outcome of Monday’s deliberations, and that he is confident that the foundation has been laid for improved relations.

Holness described the agenda as being “a very heavy” one and that “many of the items discussed require us to do even more work. 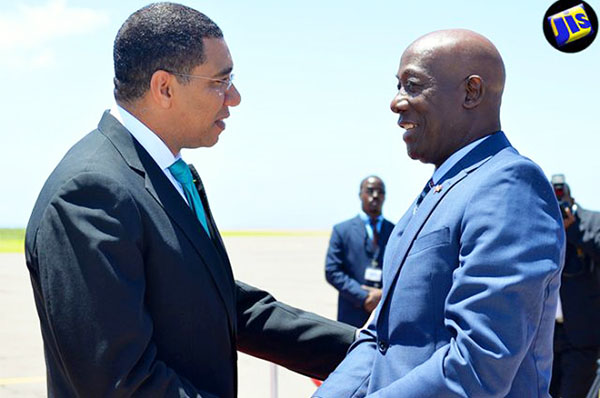 “We will conclude many of those discussions on Thursday. We will have a full statement and sit down with the press to answer your questions,” Holness promised.

Rowley arrived here, on Sunday, on a four-day visit, overshadowed by Kingston’s continued concerns at the treatment of its nationals on arrival in his oil-rich twin-island republic.

On the eve of his arrival, Foreign Affairs and Foreign Trade Minister, Kamina Johnson Smith, told the Senate that at least 320 Jamaicans were denied entry into the sister CARICOM country, last year, while only two Trinidad and Tobago nationals were denied entry during the same period.

She said that between January and June this year, Trinidadian authorities denied entry to 230 Jamaicans and were on track to deny up to two percent of Jamaicans who sought entry.

But Johnson Smith said the trend is changing, following the intervention of the Jamaican government in March, after Port of Spain denied entry to nearly a dozen Jamaicans.

Johnson Smith and her Trinidad and Tobago counterpart, Dennis Moses, later told reporters that significant progress has been made in ironing out concerns related to immigration issues.

According Johnson Smith, as promised, immigration officials at the Piarco International Airport in Trinidad will complete their first phase of training on Tuesday.

“They have undergone five days of training to ensure that the entire cohort will be upgraded in ensuring the customer experience at the Piarco Airport will be an improved one. They will continue to work on this and CARICOM has also ensured that across the region, that there will be continued phases of training for immigration officers,” she said

Moses added that the training will be ongoing, at all levels, for immigration officers in the twin-island republic.

“That training will involve 20 to 30 persons per day, and also there will be in excess of 100 persons trained, including supervisors….this is a positive development, based on the commitments made,” he said.

She made reference to the role her counterpart played in ensuring that the process was expedited and blockages were removed, to ensure that 15 Jamaicans, who were detained in Trinidad and Tobago recently, were returned to Jamaica.

“A further 26 have completed their special enquiry process and will return to Jamaica in the soonest order,” she said, adding “when policies are made and are kept, we must recognise the good faith that comes with it”.

She noted that Moses “kept his word” in committing to training the officers and providing facilities to ensure that persons who are not permitted to enter, have dignified accommodations; “these were not just words … this bodes well for our path of partnership moving forward”.

She echoed her prime minister, in disclosing that other issues explored, included the implementation of CSME regime in the region

“This of course sets us on a solid path to ensuring that we address trade issues between our countries – there’s more work to be done in that regard, and there will be further bilateral meetings during the week,” she added.

She said the two leaders had discussed the implementation of the Caribbean Court of Justice (CCJ) ruling in the Shanique Myrie case against the Barbados government, and what needs to be done, as it relates to community law and how it is rationalized with domestic law in Trinidad and Tobago.

Myrie , a Jamaican national, successfully sued the Barbados government, after she was refused entry into the island in 2011.

The CCJ, which was established in 2001 to replace the London-based Privy Council as the region’s final court, and also functions as an international tribunal interpreting the Revised Treaty of Chaguaramas that governs the regional integration movement, awarded pecuniary damages in the sum of BDS$2,240 (One BDS dollar = US$0.50 cents) and non-pecuniary damages to the tune of BDS$75,000.

“Jamaica has taken certain steps and will continue to ensure the robustness of our framework, and Trinidad had also committed to reviewing its processes and updating us,” she said, noting that where energy is concerned, technical matters will be addressed, in terms of policy and related issues and how it is treated within CARICOM and third parties. 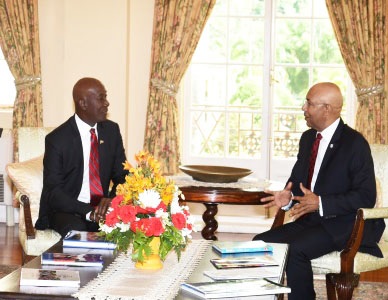 Prior to his meeting on Monday, Prime Minister Rowley paid a courtesy call on Governor General, Sir Patrick Allen, and later said he wished Jamaica prosperity.

“My love and very best wishes to all the people of Jamaica, for peace, prosperity and brotherly love, from all the people of Trinidad and Tobago,” Rowley wrote in the official guest book following his 30-minute visit.

A statement from the Office of the Jamaica Prime Minister indicated that the two CARICOM leaders will discuss the signing of a Framework Agreement and the establishment of a Joint Commission, which is currently under negotiation, to provide a structured medium for bilateral discussions and cooperation in areas of mutual interest. The prime ministers are also expected to engage on the CARICOM integration process.

The Trinidad and Tobago prime minister is expected to meet with the Chairman of the CARICOM/CARIFORUM Review Commission and meet with the Leader of the Opposition.

Rowley is also scheduled to engage with heads of private sector bodies and entities on trade and business development.

During his visit, he will also address the 22nd Session of the General Assembly of the International Seabed Authority, which is underway at the Jamaica Conference Centre. Trinidad and Tobago played an instrumental role in the development of the Law of the Sea.

Rowley will also meet with the Vice Chancellor and senior executives of the University of the West Indies (UWI), members of the Diaspora, as well as students from Trinidad and Tobago.

In addition, he will have a scheduled event with Trinidadian entrepreneurs in Jamaica before his departure on Thursday.