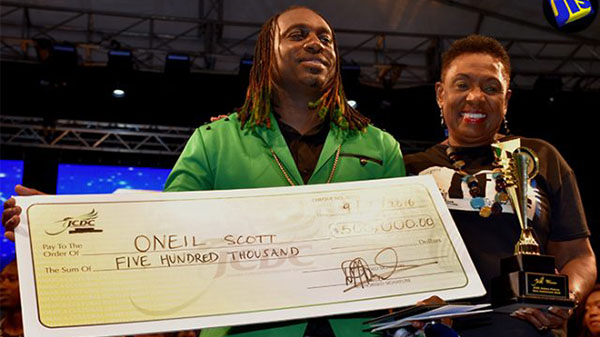 KINGSTON, Jamaica July 18, 2016 (JIS) — Oneil “Nazzleman” Scott walked away as the winner of the Jamaica Cultural Development Commission’s (JCDC) festival song competition, with his entry ‘No weh like Jamaica’.

Second place winner was Reneive Fletcher with her entry “Tun up di music”, while the third place spot went to the group Mento Tones, comprising of Denzil McCollin and Charles Evans.

The event was held on Saturday (July 9) at the Ranny Williams Entertainment Centre in Kingston.

Scott, who is an experienced singer, as well as a dee-jay, defeated nine other contestants to take home the JCDC trophy, as well as the cash prize of $500,000.

He has been singing from the tender age of 12 and started recording in the studio by the age of 15.

The artiste expressed how important it was for him to have won the title, stating that he had previously been a finalist in the Competition, placing third in 2012 and second in 2015.

“I am very grateful because I have been denied the title two times and people were looking out to see the determination that I put behind the music…people love it (the song) right across the Diaspora and in Jamaica,” he told JIS News.

He also explained what inspired him to write his winning piece.

“A lot of things have inspired me, when you go to the hotels…. the hospitality that you get from the staff makes you realize that the people are warm and welcoming. Jamaica is a very friendly place, despite certain obstacles,” he added.

Fletcher, who is a graduate of the Shortwood Teachers’ College, is no stranger to performin, having won several awards in the JCDC Festival of the Performing Arts competition.

She lauded the agency for the work that it has done and continues to do, and is encouraging others to enter their competitions.

“I must say hats off to the JCDC because they have been doing such a tremendous job. Since performing…. my confidence has grown and there has been improvement in how I interact with people. It doesn’t matter whether it is drama, music, the culinary arts or fashion, there is a place for everyone when it comes to JCDC,” she said.

The festival song competition has been around since 1966 and has been instrumental in the development of cultural awareness in Jamaican citizens, as well as providing a platform for aspiring artistes, songwriters and producers to showcase their talents.