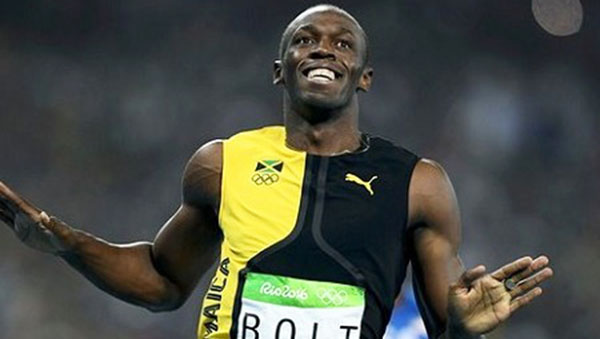 RIO DE JANEIRO, Brazil, August 15, (CMC) – Jamaica’s Usain Bolt became the first athlete to win a hat-trick of Olympic 100 metres titles, when he stormed to 9.81 seconds in the final at the Rio Olympics here, last night.

The 29-year-old, running out of lane six, produced a late surge to pass American rival, Justin Gatlin, and create history at the Olympic Stadium.

Gatlin clinched silver in 9.89 seconds, while Canadian Andre de Grasse was third in 9.91.

The Prime Minster said Bolt’s indomitable spirit and focus, inspire not only Jamaicans but millions of people all over the world.

“Bolt has etched his name as the greatest sprinter the world has ever seen. Jamaica is fortunate to have a son who inspires so many and ensures our country continues to be the sprint capital of the world,” Holness said.

“Magnificent, record-breaking, Bolt does it again!” was the reaction of Jamaica’s Minister of Culture, Gender, Entertainment and Sport, Olivia Grange, after watching Usain Bolt win.

“Usain has accomplished what no other athlete has done and he’s proven himself once again to be the greatest — and there’s a lot more left in him,” said Minister Grange.

“Usain is a special gem. He is a great representative of Jamaica and the perfect ambassador for his sport.  And I believe all people are inspired, but Jamaicans especially will be walking with livelier steps because of Usain and the entire Jamaica team at the Rio Olympics,” added Grange.

Prime Minister Holness also congratulated all the Jamaican athletes who are competing in Brazil.

“I want to make special mention of Shelly-Ann Fraser-Pryce, who got bronze, and Elaine Thompson, who won her first gold medal (in the women’s 100m). Both women epitomise true Jamaican spirit,” said the Prime Minister.

Holness stated that the Jamaica government will, after the games, reveal an appropriate initiative to honour all the athletes who have competed on the world stage and brought such tremendous pride to the nation.

Grange, who has already begun planning a welcome home reception for the team, said, “Jamaica will truly honour Bolt and the rest of the team for what they have achieved.”