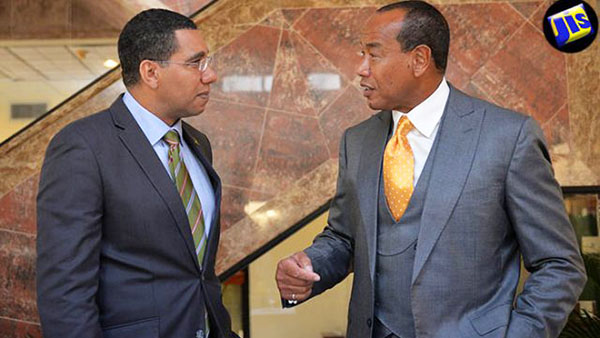 Jamaica Prime Minister, Andrew Holness (left), and Chairman of the Economic Growth Council (EGC), Michael Lee-Chin, seen in conversation, following a press conference at the Office of the Prime Minister, yesterday, to provide an update on the work of the EGC. Photo credit: Yhomo Hutchinson/JIS.

“Five percent might look like a great feat… but we are starting and I am confident that we will achieve (it),” he said at a press conference, held at the Office of the Prime Minister, yesterday.

He said that since its establishment in April, the EGC has met more than 50 stakeholder groups, including representatives in government, the private sector, the opposition, multilaterals, international partners, unions, churches and other non-governmental organisations.

The Prime Minister noted that the consultations have allowed stakeholders to have a greater appreciation of the government’s seriousness about achieving the growth target, while building partnerships to kick-start the growth engine.

“The way that I am approaching government is to build consensus around critical issues, for people to take on the difficult subject areas and realise that change… can be a win-win if we understand where we are going… ,” he said.

Chairman of the EGC, Michael Lee-Chin, stated that the consultations have allowed for insight into the mood and enthusiasm of stakeholders, as well as developed a good understanding of how government works. He noted that the feedback has been one of support.

“We, at the EGC, are not only up for the challenge but we are pumped, after listening to the stakeholders, and we are confident that ‘five in four’ will be achieved,” he said.

Lee-Chin said the council intends to report to the nation on a quarterly basis.

The EGC was set up as part of government’s efforts to grow the economy and create jobs.

It has responsibility to advise the government on the establishment of a framework of growth initiatives to be adopted, along with a timeline for implementation; and to monitor and report on the progress in the execution of those measures.

It will also allow suggestions from the public through a dedicated email address.

The council reports to the Prime Minister.