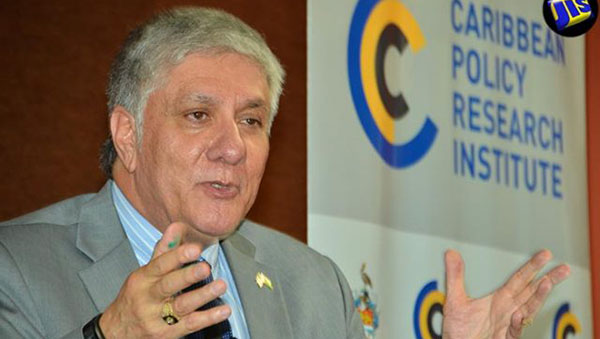 United States Ambassador to Jamaica, Luis G. Moreno, makes a presentation at the Jamaica-US Bilateral Relations Forum, held at the Regional Headquarters of the University of the West Indies on September 7. Photo credit: Rudranath Fraser/JIS.

FBI To Set Up Office In Jamaica

KINGSTON, Jamaica, September 9, 2016 (CMC) – The United States Federal Bureau of Investigation (FBI) and the Bureau of Alcohol, Tobacco, Firearms and Explosives (ATF) are to set up offices in Jamaica, as part of measures to help fight crime and violence.

The Forum focused on a report from the Caribbean Policy Research Institute (CaPRI) entitled ‘Dialogues between Democracies: The Future of US-Jamaica Bilateral Relations’.

The report focused on areas such as enhancing security; emboldening democratic governance; increasing trade and investment; enabling health and prosperity; endorsing full and equal citizenship; and strengthening the partnership.

Prime Minister Andrew Holness, who addressed the conference, said his administration is fairly advanced in developing a strategic anti-crime action plan, which involves an integrated and comprehensive set of measures and actions to significantly reduce crime in the country.

“In the next budget you will see an allocation which will be significant, but necessary, in ensuring that Jamaica, once and for all, brings the crime monster to heel,” Holness said.

Ambassador Moreno said that over the past year, 16 courses have been conducted in areas such as forensics, investigating terror networks, investigating cybersecurity crimes and spotting false documents.

“Having the FBI means that if there is a federal crime committed here, which affects both Jamaica and the United States, I don’t have to wait for the office in Miami for international affairs to send me agents. Once we have an office here full-time, that guy will go out, train people, and will liaise and exchange information.”

The diplomat said the ATF is crucial, as it can trace serial numbers and conduct forensic tests on guns coming through the United States and Central America in the drugs for gun trade.

He said that the US has invested and will continue to invest tens of millions of dollars and thousands of man-hours in improving the capabilities of Jamaica’s security forces and the judiciary.