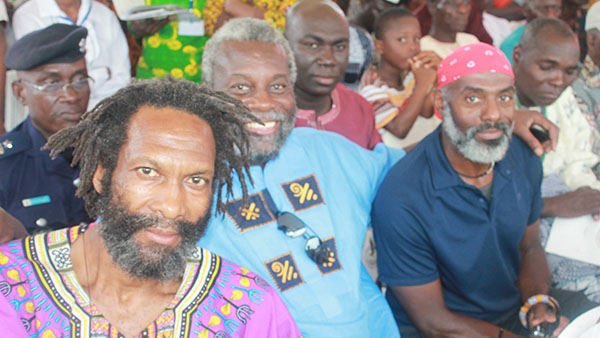 TORONTO, Ontario September 15, 2016 (PRIDE) — Three African Canadian artists were so inspired by a trip to their ancestral homeland in Africa, last year, that they have planned an event to raise funds for community initiatives there.

The artists, Mello Ayo, a performance poet; Michael St. George, a reggae, spoken word, world artist; and Owen ‘Blakka’ Ellis, actor, writer and teacher, all from Jamaica, spent three weeks, October 23 to November 13, together on a sojourn to Ghana.

The ‘return’ trip was initiated and guided by a fellow African Canadian and Jamaican, Nene Kwasi Kafele, a community builder, who has for decades, been quietly doing significant work in the continent.

Kafele has been providing tangible support to a range of community initiatives in Ghana.

“Michael St. George’s leadership stature and spiritual wisdom, Blakka’s insight and love of language and people, and Nene’s depth of knowledge and stately carriage on the African landscape, this was my greatest privilege and joy to witness and share, “ said Mello, shortly after arriving from the trip in 2015.

He kept a detailed journal and plans to publish a book based on the experience.

St. George was enthusiastic about the trip: “My travel to Ghana was an extremely grounding experience that was personally, spiritually and culturally expansive. It was painful yet magically filled with joy. ”

“It was uncanny how everything about the place felt refreshingly new, yet strangely familiar. It was a necessary return,” says Blakka.

The artists say the event, “RETURN! Afrikan Punctuation,” will provide a powerful and colourful opportunity for a community cultural sharing and celebration.

They will share exciting new works and recount aspects of their journey, using a range of creative media in an informative and entertaining evening interspersed with performances from several guest artists. 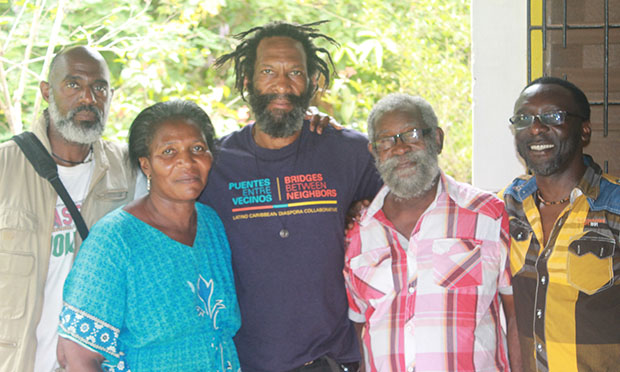 The guest artists include Amina Alfred, Brother Sankofa, The Unbuntu Drummers – who recently performed in Jamaica at an event to honour Jamaica’s first national hero, Marcus Mosiah Garvey – and others.

The event, to be hosted by Danae Peart, CEO of Vibe 105FM, will be held on September 25 at the United Steelworkers Hall at 25 Cecil Street in Toronto. Contributions will be accepted to support the Aya Afrika Foundation.

The hall sits almost across from 20 Cecil Street where the City of Toronto Culture Division erected a plaque in 2000 to commemorate the significant contributions of Donald Willard Moore, a Barbadian and civil rights activist, who fought to change Canada’s exclusionary immigration laws in the 1950s.

The City of Toronto’s web exhibit, “Caribbean Connection: One Man’s Crusade,” notes that “in 1956, Moore and two other members of the Negro Citizenship Association purchased a 12-room house on Cecil Street and converted it into a recreation centre for the West Indian community called Donavalon Centre.”

“In addition to serving as the home of the United Negro Improvement Association and the Toronto Negro Citizenship Association, the Donavalon Centre offered a range of activities and services, including dances, teas, Sunday programs, insurance for its members, and the publication of a quarterly newsletter.”

Several African Canadian organizations have continued to that tradition by holding community events nearby – at the United Steelworkers Hall.

Aya Afrika, formerly Manya Krobo Youth Coordinating Council (MKYCC), was founded in 2010 as a result of the community development and community capacity building and sustainable development work of Kafele in West Africa, mainly in Ghana, over the past 25 years.

He is the Chief of Development, with a focus on youth, for Manya Krobo Traditional Area.

Kafele established two chapters of the foundation in Ghana and Toronto to provide input, advice, expertise, support and coordination related to working with young people and those most vulnerable.

The foundation has been the driving force behind various health and educational projects and has received tremendous support from community members in Canada and in Ghana.

The Aya Afrika Foundation is currently raising funds to support the purchase of incubators and emergency communications equipment for women in Manya Krobo.

It also provides financial support to caregivers of orphans in the area to assist with expenses related to medical, educational, food and livelihood, in general.

A collaborative planning process in Yebongo, Bolgatanga is currently underway to determine critical health needs for that community as well. This should be finalized by December this year.

It currently supports the development and expansion of the local Water Access, Sanitation and Hygiene (WASH) committee which provides education, management and technical maintenance support.

There is also a comprehensive schools-based support project to support 43 of the most needy students in Manya Krobo Traditional Area.