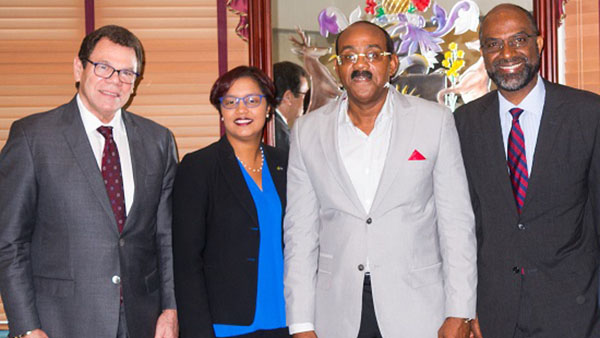 St. JOHN’S, Antigua and Barbuda, September 19, 2016 – The Caribbean Community (CARICOM) has deepened its partnerships within the region, in order to strengthen its efforts to address the withdrawal of correspondent banking services from some regional institutions.

Prime Minister of Antigua and Barbuda, Gaston Browne, who is leading CARICOM’s advocacy on the matter, recently met with the heads of the Caribbean Development Bank (CDB) and the Jamaica National Building Society (JNBS) to discuss CARICOM’s high level advocacy in response to the emerging de-risking practices by correspondent banks.

“De-risking of correspondent banking services is an existential threat facing the Caribbean region, which has the potential to decimate our living standards. We must work, collectively as a region, to address this threat to our survival,” Browne said, following the meeting in St John’s.

Correspondent banks, which are mainly large, international banks domiciled in the United States of America, Europe and Canada, provide Caribbean states with vital access to the international financial system, by offering services to smaller, domestic banks and financial institutions to complete international payments and settlements.

However, many banks, which provide correspondent banking services, have been seeking to manage their risks by severing ties with institutions in the region.

The issue garnered interest from CARICOM at its 27th Inter-Sessional Meeting of the Conference of Heads of Government in Belize in February. At that session, a team, led by the Antigua and Barbuda Prime Minister, was appointed to lobby policymakers in the United States of America, Canada and the United Kingdom on the threat to Caribbean economies from the withdrawal of correspondent banking services.

Browne says JNBS and CDB will provide technical assistance to advance CARICOM’s advocacy efforts and work with CARICOM to identify solutions to the challenges. They will also be assisting CARICOM to coordinate implementation efforts and to strengthen monitoring mechanisms.

As part of its contribution, JNBS, which has been among institutions in Jamaica leading advocacy efforts to address the emerging correspondent banking problems, is developing a website to increase awareness about the emerging issue, while the CDB will continue to work with the Caribbean Financial Action Task Force to build capacity of member countries.

“Correspondent banking services are a public global good that is essential for participation in global trade; and is particularly important for small island economies,” Prime Minister Browne said.

General Manager of JNBS, Earl Jarrett, pointed to the threat to services such as remittances, on which the region depends.

Highlighting challenges faced by his organization’s remittance company in the Cayman Islands, he stated that the value of remittances was equivalent to a significant percentage of gross domestic product for many receiving countries in the region.

“Remittances are the lifeline for migrant communities across the region. And, Jamaica alone, with a Diaspora population of some three million, represents one of the largest recipient countries in the region, accounting for amounts equivalent to approximately  17 percent of our gross domestic product (GDP),” Jarrett affirmed.

In addition to solutions and advocacy approaches to address de-risking, the meeting also included discussions about an upcoming CARICOM conference on de-risking to be held in Antigua and Barbuda next month.