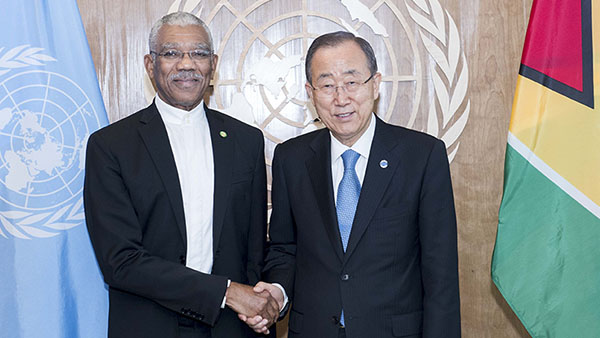 During a meeting with Guyana President, David Granger, last Saturday, the UN Secretary General said his assessment will most likely be given in November .

Granger, who accepted the timetable, has committed to providing the Secretary General with any additional information needed to complete the assessment.

“We have been very impressed with the seriousness with which you have approached the problem, and your own sincerity… We have been personally convinced that you want to bring closure to this matter,” the President said.

Guyana has been pressing the United Nations to recommend a judicial settlement to the decades-old border controversy.

At a press conference last week, Granger expressed satisfaction with efforts, being made by the outgoing official, to find a satisfactory solution to the longstanding border dispute between Guyana and Venezuela.

Despite agreeing to the 1899 Tribunal award to settle the  border dispute, Venezuela has, in recent times, continued to lay claim to Guyana’s territory, alleging corruption on the part of the 1899 tribunal, which ruled in Guyana’s favour. Venezuela stakes its claims on a death-bed confession of a member of the 1899 tribunal.

“I am satisfied with what the Secretary-General has done; I am not satisfied that the Bolivarian Republic has acted in good faith. It is clear that much more needs to be done by Venezuela if this matter is to be resolved…”

“In my experience over the last 50 years I have not seen a Secretary-General so engaged in this matter, he has done everything possible over the last year since first meeting in Bridgetown. I am convinced of his sincerity in trying to bring this matter to closure,” Granger then told reporters.