Based on the latest information available regarding the projected path of Hurricane Matthew, Jamaican officials have made the decision to reopen the Norman Manley International Airport for full operations at 12:00 noon today. Airlines are now making arrangements for the commencement of flight activity. Photo credit: JIS.

PORT AU PRINCE, Haiti, October 4, 2016 (CMC) – Hurricane Matthew, the most powerful hurricane in nearly a decade, is continuing to pound Haiti with heavy rains and winds in excess of 145 miles per hour (mph), today, as it makes its way towards Eastern Cuba.

The eye of Hurricane Matthew was located in the Windward Passage, moving toward the north, and weather forecasters said it will move over the extreme portion of eastern Cuba later this afternoon.

“A turn towards the north-northwest is expected by Wednesday, followed by a northwest turn Wednesday night. Matthew is expected to move near or over portions of the southeastern and central Bahamas tonight and Wednesday, and approach the northwestern Bahamas Wednesday night,” the Miami-based National Hurricane Center (NHC) said in its 2.00 pm (local time) bulletin. 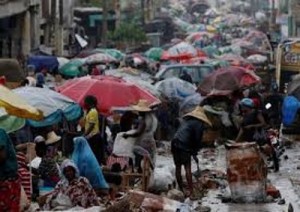 The eye of the Category 4 storm made landfall, early Tuesday, at the south-western tip of the French-speaking Caribbean Community (CARICOM) country with the NHC indicating that Haiti was “getting everything a major hurricane can throw at them”.

“It’s much too early to know how bad things are but we do know there are a lot of houses that have been destroyed or damaged in the south,” said Marie Alta Jean-Baptiste, Director of the Civil Protection Agency, while Interim President, Jocelerme Privert, said some people had died, but gave little details.

Many of Haiti’s 11 million people live in areas prone to flooding and in flimsy housing and the NHC said that Matthew is expected to bring up to 40 inches of rain as it moves north.

“Life-threatening flash floods and mudslides are likely from this rainfall in southern and northwestern Haiti, the southwestern Dominican Republic, and eastern Cuba,” the NHC said, adding that the combination of a dangerous storm surge and large and destructive waves could raise water levels by as much as 11 feet in some areas.

“Matthew is a Category 4 hurricane on the Saffir- Simpson Hurricane Wind Scale.  Some fluctuations in intensity are possible during the next couple of days, but Matthew is expected to remain a powerful hurricane through at least Wednesday night,” the NHC added. 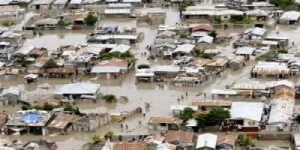 Many Haitians live in shanty towns that offer little protection from the high winds and rains. Many had refused to evacuate, fearing that what few possessions they have left would be stolen.

Two of the candidates for Sunday’s presidential elections have announced a postponement of their campaign and an appeal for unity to deal with the impact of the hurricane.

“I and my campaign team, we are ready to help people during and after the hurricane. It is in the union, hand in hand we can get through this time,” said Jude Célestin, presidential candidate under the banner of “Alternative League for Progress and the Haitian Emancipation” (LAPEH).

His counterpart, Jovenel Moïse, of the PHTK party, said “this is a time of truce, to pause in order to help victims cope with all the problems that will arise.”

“I am preparing to be at their sides and I ask you to do the same, because Haiti is one country, one nation, one people and face the problems we must be united,” he added.

The NHC said that the eye of the “extremely dangerous Hurricane Matthew” is expected to hit far Eastern Cuba later on Tuesday, and that a hurricane warning is in effect for Haiti, Cuban provinces of Guantanamo, Santiago de Cuba, Holguin, Granma, and Las Tunas, southeastern Bahamas, including the Inaguas, Mayaguana, Acklins, Crooked Island, Long Cay, and Ragged Island

The warning is also in effect for central and north-western Bahamas, where the authorities have already closed down several airports, government offices and schools and urged residents to monitor the passage of the storm.

“As of now, we are urging all Bahamians to take maximum safety precautions for yourselves and for your families,” Prime Minister, Perry Christie, said.

“We expect representatives of the government — that is NEMA — to continue to make statements,” the Prime Minister said, urging all communities to follow their directions.

“So, let us pray that there is no impact at all from this hurricane, and if there is impact, it is a minimal impact on our people and on our country,” the Prime Minister said.

“But, in any event, whatever is the state, the government remains ready and prepared to take immediate action now and after the impact of the hurricane, and we wish everyone well,” he added.

Jamaica was spared the full brunt of the worst storm to affect the Caribbean since 2007 but it brought with it heavy rains, strong winds resulting in numerous floods.

The U.S. Agency for International Development said that it was sending a disaster response team to the central Caribbean to coordinate relief and supplies. It said it was sending US$400,000 in initial assistance to Haiti and Jamaica to help humanitarian organizations provide critical relief.

Authorities in Jamaica said that an estimated 1, 845 people were at 89 shelters and that the government has already stipulated that persons in storm shelters across the island are to be provided with food and other supplies upon entering the facilities.

The Office of Disaster Preparedness and Emergency Management is reporting that the National Emergency Operations Centre has scaled down activities to Level 1 Activation (Monitoring Phase), in light of the reduction in the threat level of Hurricane Matthew.

The Office of Disaster Preparedness & Emergency Management is also recommending a return to routine operations where possible.

The public transportation system has resumed a limited service today; all Shelters will begin scaling down operations today depending on conditions in their respected areas; all Ministries, Departments and Agencies will reopen at 10:00 a.m. today; businesses are encouraged to follow through on their Business Continuity Plans; and the Minister of education will advise when schools will resume.

The ODPEM will continue to monitor the situation.