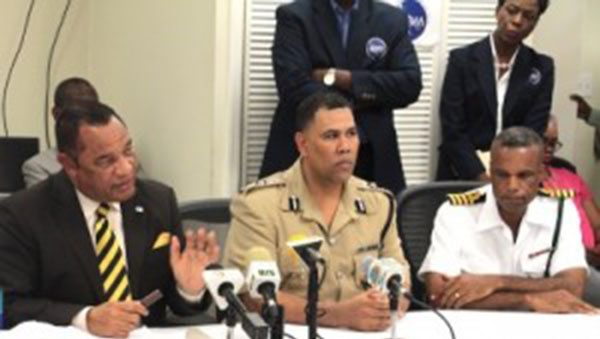 The Bahamas Brace For Hurricane Matthew

NASSAU, The Bahamas, October 5, 2016 (CMC) – The Bahamas, today, intensified preparations for the passage of Hurricane Matthew, closing schools and government offices, as well as airports and opening shelters to accommodate persons who have had to flee low lying areas.

Prime Minister, Perry Christie, has already met with various stakeholders operating under the umbrella of the National Emergency Management Agency (NEMA) and updated the nation on the possible severity of the approaching Hurricane Matthew.

The officials said that Hurricane Matthew, with winds of 125 miles per hour (mph), will affect the entire Bahamas and is forecast to pass close enough to New Providence to bring hurricane-force winds and destructive sea surges.

They said that the Lynden Pindling International Airport will close at 11 am (local time) and that airports in several of the islands will also close today.

Meanwhile, the Ministry of Tourism is reporting that approximately 1600 guests are being evacuated from Grand Bahama Island.  All cruise ships have now re-routed away from ports in The Bahamas to other destinations.

The Port Department has advised that the Port of Nassau will closed at noon today, and that the  Royal Bahamas Defence Force will take charge of the facility and be responsible for its reopening.

“We are praying for the best outcome with the storm. The Bahamas is a place where the world comes to vacation. As we prepare to face the impending hurricane, what is of critical importance to us is the safety of our residents and visitors,” said Director General in the Ministry of Tourism, Joy Jabiru.

“Once the all clear is given, we will turn our attention to assisting with recovery efforts, if necessary, and also to sending the message to the world that The Bahamas is once again open for business,” she added.

NEMA has already released the official list of hurricane shelters and has implemented an emergency warning system to better prepare and inform the public about a disaster about to impact the country.

The Miami-based National Hurricane Center (NHC) in its 8.00 am (local time) bulletin said that Matthew is heading for Central and Northwestern Bahamas and is 115 miles south of Long Island.

“Matthew is moving toward the north-northwest near 10 mph.  This motion is expected to continue today, followed by a northwestward turn tonight.  On this track, Matthew will be moving across the Bahamas through Thursday, and is expected to be very near the east coast of Florida by Thursday evening.”

It said Matthew is expected to produce rainfall up to 12 inches in the Bahamas and life-threatening flash floods and mudslides are likely.