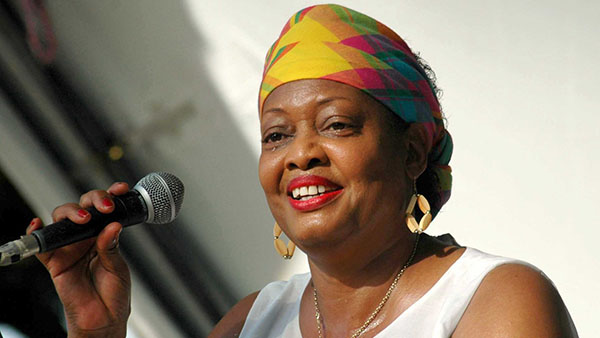 Ophelia, a popular singer of cadence-lypso in the 1980s, is sometimes referred to as “Dominica’s Lady of Song”, the “First Lady of Creole”, and “la grande dame de la musique Antillaise”.

The Dominica-based online publication, DA Vibes, said that the three, including writer, Mc Carthy Marie, who is also the husband of Ophelia, allege that the bank breached their rights in copyright when, between August 27 and November 4 last year, without permission, reproduced the musical work “Aie Dominique” .

They claimed that the CDB synchronised the work with its pictures in an audio-visual production entitled “Aie Dominique”, which purports to show the intervention in Dominica of the CDB following the passage of Tropical Storm Erika on August 27 last year.

Ay Dominique is Ophelia’s signature tune and her first recording, which became an iconic anthem for Dominicans.

Mc Cathy Marie claims that he is the owner of the economic rights in the song, which is sung by his wife, by virtue of a music publishing contract which assigned all transferable rights to him.

He claimed that the CDB also infringed his right of reproduction by downloading the song from YouTube prior to synchronizing it with its pictures.

Additionally, Henderson is claiming infringement of his moral right since he was not named as the keyboard player on the same sound recording.

Meanwhile, Ophelia Marie is claiming multiple infringements by the bank. She said the bank breached her copyright when, sometime between 27th August and 4th November, it uploaded its audio-visual work to the Vimeo video hosting service, thereby infringing her exclusive right to make her fixed performance available to the public.