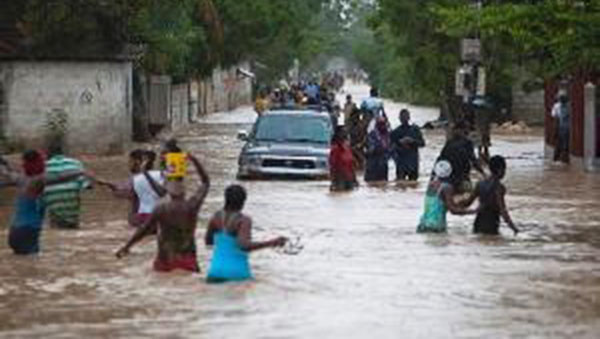 Haitians wade through thigh-high water on flooded streets, caused by heavy rain, in the French-speaking country.

PORT AU PRINCE, Haiti, October 21, 2016 (CMC) – At least five people were killed and one other was reported missing as torrential rains caused fresh flooding in Haiti, which is still recovering from the ravages of Hurricane Matthew, earlier this month.

The Civil Protection Agency said, today, that the victims were in Haiti’s northwestern Nord-Ouest department, where several rivers overflowed their banks.

“In the commune of Baie-de-Henne, two houses close to a ravine were swept away by floodwaters, Thursday night,” said Jose Rethone, a civil protection official in the Nord-Ouest department.

“We recovered five bodies, and a person, who was in one of the houses and was swept away, is still missing,” he added.

A number of people are still unaccounted for and officials fear the death toll will rise significantly.

The rains are preventing relief organisations, including the Barbados-based Caribbean Disaster Emergency Management Agency (CDEMA) from carrying out their operations in some of the most affected areas.