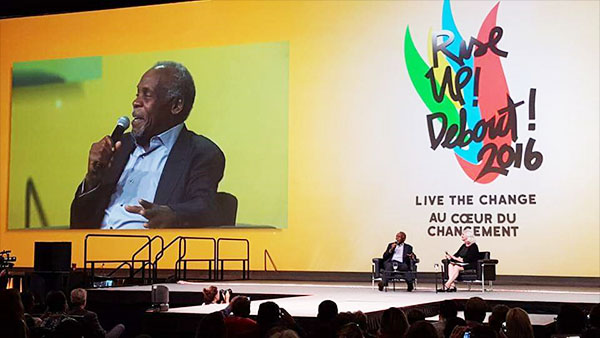 Danny Glover, an American actor and film director known for his roles in Lethal Weapon and The Colour Purple, was interviewed by Ferne Downey that was widely regarded as one of the highlights of the CLC conference.

OTTAWA, Ontario November 3, 2016 — Ottawa hotels quickly sold out as hundreds of labour and community activists, from across Canada, converged on the nation’s capital for the Canadian Labour Congress’s (CLC) 2016 human rights conference.

The conference, entitled “Rise Up 2016 Live the Change”, was recently held at the Shaw Centre that was filled to capacity.

The speakers list consisted of individuals such as Sandy Hudson of Black Lives Matter-Toronto; Hassan Yussuff, President of the Canadian Labour Congress (CLC); American actor, film director, Danny Glover, and more. Along with various panellists and speakers, from as far away as Africa, the conference consisted of several workshops and caucuses. The list of events included a Women’s Caucus, Aboriginal Workers Caucus, LGBT Caucus, workshops entitled Working While Black, Islamophobia, and more.

The Canadian Labour Congress is a central Labour body that consists of international unions, provincial and territorial federations of labour and community-based labour councils while representing 3.3 million workers across Canada.

In 2014 the CLC made headlines by electing Hassan Yussuff, a Canadian who immigrated from Guyana, as President of Canada’s largest labour body.

And, as if that was not ground breaking enough, Yussuff’s election was soon followed by the re-election of Marie Clarke Walker, a Jamaican-Canadian, to the position of Executive Vice President, re-instating her as the highest ranking elected Back union officer in Canadian history.

Walker holds the human rights, immigration, migrant worker, employment equity, mental health and international labour organization files, and is also one of the people responsible for putting together the conference. 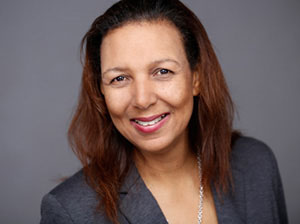 “The purpose of the conference was to bring labour activists together to have a conversation about human rights” she said, adding that part of the objective was to “Look at where we are on all the issues, where we need to be, and explore new and emerging ways of doing things. We also wanted leadership there to participate, hear the conversation and take it all back to their affiliates”.

Walker was then asked what if anything the Canadian Labour Congress does to support organizations such as Black Lives Matter, Indigenous and community organizations.

“The CLC and the labour movement, as a whole, is much more than strikes,” Marie replied. “We support many social justice causes, as we are part and parcel of the social justice movement.”

As part of the overall work of the CLC, but more specifically, as part of the mandate and work of the Anti-Racism and Human Rights department and the Aboriginal and Worker of Colour working groups, the labour organisation has supported and continue to support Black Lives Matter, Idle No More, Justica and many other indigenous and community organizations that work towards ending racism as well as migrant worker organizations. Support is given in many ways: resources including monetary, in kind, research; and encouraging membership attendance at functions and general support.

When asked the question “What are the next steps in the work of the CLC on these issues and how does this work resonate beyond labour and into communities?” Walker responded “All of the work we do resonates far beyond the movement. Our members belong to different ethnic, racial, cultural and religious communities; they also live in communities, so it is the hope that what we do transcends union affiliation and across communities. There is much more work to do but I would like to believe we have made steps in the correct direction the last 2 years.”

Danny Glover, an American actor and film director known for his roles in Lethal Weapon and The Colour Purple, is a Global United Nations (UN) Ambassador and a spokesperson for the UN Decade of People of African Descent.

Glover’s interview by Ferne Downey was widely regarded as one of the highlights of the conference.

He then went on to describe the UN discussions as discussions about how we try to end the most extreme cases of poverty. Members of the Coalition of Black Trade Unionist CBTU along with Journalist Desmond Cole received the opportunity to meet with Danny Glover to talk about what they each are doing and Danny Glover‘s role in the UN Decade for people of African Descent.

Terry Melvin, the National President of the Coalition of Black Trade Unionists CBTU, which has chapters in Canada and the United States. 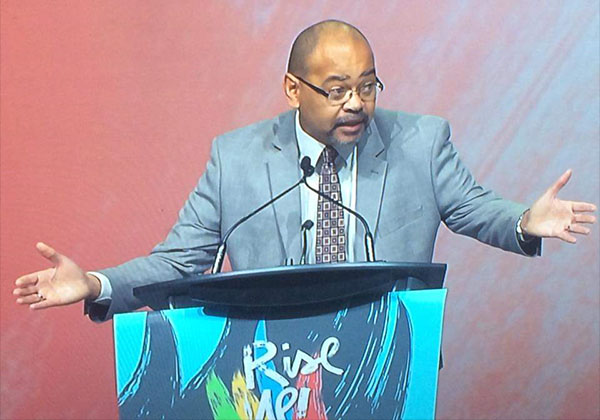 Terry Melvin is the National President of the Coalition of Black Trade Unionists (CBTU).

Melvin is also the secretary-treasurer of the powerful New York State AFL-CIO, which is the United States counterpart to the Canadian Labour Congress and an ordained Baptist Minister who serves as Associate Minister and Assistant to the Pastor at Second Baptist Church in Lackawanna, New York.

“A friend in politics is only someone who delivers for you” Melvin told the participants in the Shaw Centre, which, by this time, was filled to capacity.

He went on to speak about a struggle for the greater good and encouraged the participants to be committed beyond commitment to changing the status quo.

2014 brought new leadership to the CLC. What has quickly become apparent are increasing examples of the work of the CLC transcending beyond its membership list and spilling into the Canadian population.

The human rights, anti-Black racism, Islamophobia and Indigenous files appear to show exactly that. Labour’s work on the social justice and community fronts appears to have shifted into high gear and become much more readily apparent.

As the line that separates the work of organized labour and the work of Canada’s community groups continues to be blurred, the cohesion that occurs as a result, threatens our theoretical Canadian identity with improvements that may make Canada the envy of the western world.