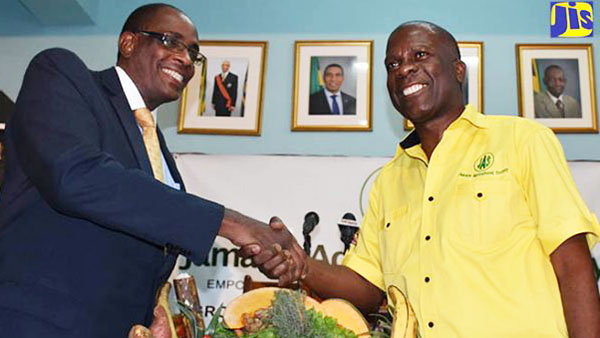 Chief Technical Director in the Ministry of Industry, Commerce, Agriculture and Fisheries, Stephen Wedderburn (left) and President of the Jamaica Agricultural Society (JAS), Norman Grant, shake hands during the launch of ‘Eat Jamaican’ Month on November 2 at the JAS head offices in Kingston. The JAS, in collaboration with the Ministry of Agriculture and Fisheries, is celebrating the 13th anniversary of the ‘Eat Jamaican’ campaign under the theme ‘Grow What We Eat, Eat What We Grow’. Photo credit: Mark Bell/JIS.

JAS Says Jamaica Will Have Enough Pork For Christmas

KINGSTON, Jamaica, November 4, 2016 (CMC) – The Jamaica Agricultural Society (JAS) says there will be an adequate supply of pork for the upcoming Christmas season and that pig farmers are now producing to meet 60 per cent of local demand.

JAS President, Norman Grant, said the association will also be able to provide sufficient fresh meat to the general market, as well as to ham processors.

Speaking at the launch of ‘Eat Jamaican’ month earlier this week, Grant said the JAS will be using the observance to intensify its promotion of local foods leading up to the Christmas holidays.

He said the JAS is in discussion with the Tourism Linkages Hub in the Ministry of Tourism to form a partnership to promote the initiative in the sector and that the campaign has achieved positive results since it was launched in 2003.

The JAS president reiterated his call for consumers to support farmers by buying local produce in order to further reduce the food-import bill, which is now at under US$900 million.

Wedderburn said the agricultural sector has been experiencing significant growth, and commended the 230,000 farmers and 25,000 fisherfolk for the tremendous work they have been doing in increasing production.

“We foresee in the Ministry continued strong growth in the sector. This, we think, is a reflection that the ‘Eat Jamaican’ Campaign is catching on,” he said.

Activities include a Thanksgiving Service on November 13 at the United Church in Jamaica and the Cayman Islands in Westmoreland and an Eat Jamaican Day Exposition on November 25.