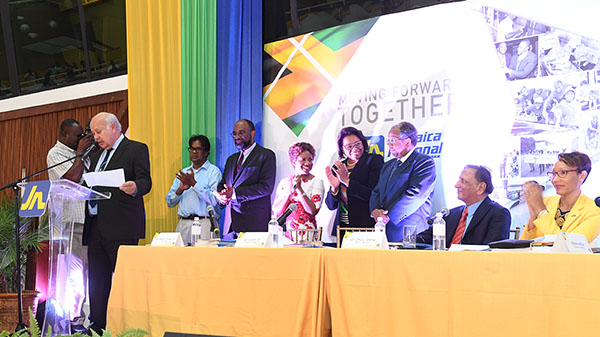 Oliver Clarke (at lectern), Chairman of the Jamaica National Building Society, announces the preliminary count in a vote by JN members to reorganise the JN Group and convert the building society to JN Bank. Voting took place at the Jamaica Conference Centre in Kingston on November 14.

Over 20,000 members voted in person or by proxy for this move that will result in the bank being launched early next year. Preliminary results from auditors, PricewaterhouseCoopers, showed more than 99 percent of JN members voting in favour of the changes.

JN Bank will become the first commercial bank in Jamaica to be fully owned by its savers and borrowers. The Society’s current savings and loan portfolio will be carried over into JN Bank.

During a meeting on Monday, Chairman of the JNBS Board, Oliver Clarke, who announced the results of the vote, said the reorganisation of the group and conversion to JN Bank, will strengthen the organisation.

“These changes will make us ultimately more flexible and position us to expand our services to our members,” he said.

JNBS executive, Maureen Hayden-Cater, who will head the bank, assured members that JN Bank will not operate similar to other banks in Jamaica.

She explained that the Society is converting to JN Bank, based on the demand from the majority of the organisation’s members for more banking services, which the organisation could not offer as a building society. These include a wider variety of loans and chequeing accounts.

“Since we made our application to the Bank of Jamaica, we have been busy preparing for our entry into the market, developing new products and services, which you have requested, such as auto loans, credit cards and unsecured loans,” she said.

Earl Jarrett, General Manager of JNBS, said the members’ approval of the reorganisation will strengthen JN.

“This structure will make us more efficient and compliant with current and previous financial regulations,” he said.

He explained that Jamaica National will present the result of the vote to the Supreme Court for final approval, and following that exercise, it is anticipated that the Bank of Jamaica will exchange the organisation’s building society licence for a commercial banking licence.

Following the reorganisation of the JN Group, a mutual holding company, to be named The Jamaica National Group, will become the parent company for the JNBS subsidiaries, where mutuality will be preserved.

The Diaspora has contributed very significantly to Jamaica National’s growth over the years. The organisation has Representative Offices in Florida in the United States of America, London and Birmingham in the United Kingdom and Toronto, Canada.

“Our members in the Diaspora have been especially supportive of our efforts and we will be strengthening our efforts to serve them even more,” said Mrs Hayden Cater.

As a mutual organisation, the Society consulted with its members in Jamaica and overseas in October and early November before moving to vote on the proposed changes. A total of eight meetings to explain the process and invite participation were held in Westmoreland; Manchester, St James; Toronto, Canada and New York and Florida in the United States of America; as well as in London and Birmingham in the United Kingdom.

Jarrett expressed appreciation to the members who voted in favour of the reorganisation and thanked the JN Group employees and JNBS Board of Directors for their support. He also expressed gratitude to PricewaterhouseCoopers, which observed the voting process to ensure transparency.

“JN members have moved our organisation forward today and we look forward to expanding our products and services and offering them the best services of any financial institution,” Mr Jarrett said, noting that the Society’s core values will be maintained in the new organisation.